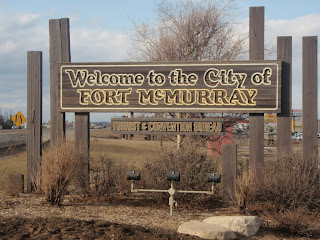 The picture I have chosen to head up this blog has a problem. Do you see it? Look closely. No, it's not mis-spelled. No, it's not that everything is a lovely shade of brown (that's just what happens when you take photos here right after all the snow melts). The problem, you see, is that it says "Welcome to the City of Fort McMurray". Why is this an issue? Because Fort McMurray isn't a city.

Oh, we have the population to qualify as a city. In fact we were a city for 15 years, from 1980-1995. In 1995, though, the city and surrounding area underwent amalgamation to become "The Regional Municipality of Wood Buffalo", and became officially designated an "urban service area". This is all very arcane, of course, and matters little to the average resident. Apparently we are the largest such municipality (by area) in the country. That is something of which to be proud, I suppose, but it seems a little bit odd to live in what is obviously a city although it lacks the official title. It can make for entertaining arguments at parties, though, and I've witnessed a couple. As these arguments tend to go these days eventually someone hauls out their iPhone and starts searching the Wikipedia entry.

I must say I find the welcome sign amusing, though. Clearly it predates the amalgamation, and is from a time when one could say they came from the city of Fort McMurray as opposed to being from "the urban service area known as The Regional Municipality of Wood Buffalo". Frankly, I still say I'm from the city of Fort McMurray. And I'm not stopping until they change that sign, either.
at April 11, 2011