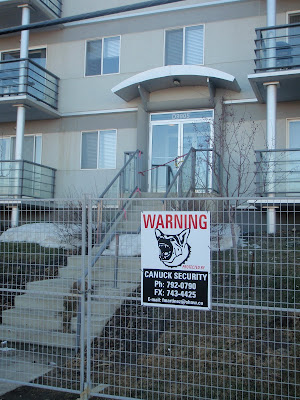 Picture this : It's almost midnight, and you hear a knock on your front door. Standing there is someone who tells you that you have 10 minutes to collect some personal belongings and then leave your home as it has been declared structurally unsafe and you are in imminent danger. Can you imagine? At first you must think it's a joke, and then panic must set in when you realize it isn't. The sad thing is that this actually happened on March 11, 2011 to the residents of the Penhorwood Condominiums in Fort McMurray.

The Penhorwood Condominium development is a group of seven condominium buildings located close to Keyano College in the downtown sector of the city. There were 168 units that were occupied, and all were evacuated after an inspection determined that the buildings were in a state that created the potential for gas line breaks and subsequent fires. The reason for this state? The buildings, built a mere seven years ago in 2004, are collapsing.

To say this is a debacle is an understatement. I'm not going to try to assign blame as there seems plenty of that pie for everyone to have a slice - the developer, the architect, the engineers, the contractors, the company that issued the permits, and, yes, the municipality. The lawsuits are beginning to fly like the ravens over the dumpster behind The Keg, and I fear in the end if will cost every taxpayer in this city dearly. More than the financial cost, though, is the personal cost to those who owned and rented these condominiums. Many of these are, I suspect, those least able to afford this kind of tragedy. They likely bought these condos as they are one of the least expensive options to owning a home in this city. To see them bear the brunt of this - to continue to make mortgage payments on a home they cannot currently reside in, and that will likely need to be demolished entirely - is a travesty.

The residents were forced to leave most of their personal possessions behind when they evacuated. They have been granted minimal access to the buildings since, in time slots of 15 minutes or so, to try to retrieve what they can. They are only allowed in 2 or 3 at a time because the fear that these buildings could collapse and cause loss of life is ever present. A new report has stated that some engineering groups feel the buildings have reached a point of "geotechnical equilibrium", enough to allow residents to remove all their property, but there is dissension on this as well with one geotechnical firm stating that they feel the risks of allowing access outweigh any benefits.

The anger and frustration for the residents and owners of these condos must be ferocious. I can only imagine how I would react in their place. Everyone involved in the development is, of course, rapidly trying to assign blame to anyone else. The developer says that the buildings can be remediated and should be habitable again. This does not appear to be the prevailing opinion, however. All I can say is that this is a stunning story, shocking in how it speaks to some very real problems in our city. I must say that when I drive by any new development I am now looking askance at them, wondering if they too suffer these kinds of issues but haven't yet had them detected. I drove by Penhorwood to take the photos that appear in this post, and to see the development surrounded by chain link fencing with signs warning of security is unsettling to say the least. Seeing balcony lights that were left on in the haste to depart, personal possessions still on inaccessible balconies, and a forlorn "For Sale" sign hanging outside one unit was simply too poignant for words.

I've spoken to some engineers I know, people who have worked all over the world, and asked if they have ever heard a story like this. They uniformly shake their heads and say no - maybe in the third world, just maybe - but not in a country like Canada. So why did it happen here, in Fort McMurray, a city with such known affluence? Perhaps because this is a city that has grown too fast, and because there is such affluence. It is a lure for those wishing to make an easy buck, an opportunity for those to cash in on such opportunities and then walk away whistling with lined pockets. It seems unconscionable for this to happen, but sadly it does. There has long been questions about the quality of things here, particularly of new houses and new developments, and this story seems to be the epitome of it all. It speaks to life in a boomtown, and it speaks to some issues we desperately need to address before we find ourselves with our houses fallen down around us. 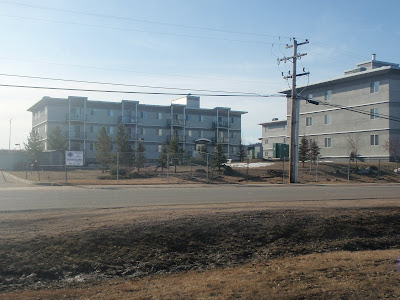 **For further information and reading on this story I highly recommend visiting Penhorwood Place Evacuation. This site chronicles the story as well as hosting photos of the buildings showing the signs of impending collapse and other structural deficiencies. A copy of the lawsuit being pursued can also be accessed on this site. I truly think every resident of Fort McMurray owes it to the residents of Penhorwood, and also to themselves as citizens, to visit this site and educate themselves on this topic. Please note that everything that I have written above is solely my opinion. I leave it to you to form your own.**
at April 13, 2011