Being the Change: Thoughts on Mother's Day 2015 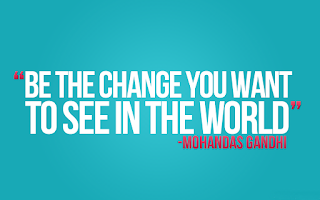 When I first began to write this blog I found myself in tears often. There are many reasons for that, I suppose, from being on an already emotional personal journey at the time to encountering stories with an impact for which I was not prepared. And then there was the belief that the tears were almost genetic in nature, as my mother, the most deeply compassionate and loving person I have ever known, cried freely when I was growing up, and I learned to never fear tears.

In recent years I cried less often, though. The tumultuous nature of my personal life settled down considerably and I developed a pattern and rhythm in my life that was less prone to sudden emotional occurrences. There is no doubt, too, that hearing more and more stories makes you a bit less subject to the tears, as you would spend all your time crying in your car (as I did a great deal at the beginning) as opposed to writing, and so I learned to put the tears aside for the most part, still feeling the emotions but putting my energy into writing about them and not the tears. On occasion, though, I find something that still makes me cry, like I did early on Saturday morning.

It was a video, just a simple video from our local Shaw TV outlet. You see they had been in cahoots with the Fort McMurray Fire Fighters and cooked up a little surprise for some local non-profit organizations. The firefighters - you know, the people who risk their lives for us on the regular as part of their job - had spent their free time and energy fundraising cash for local groups, and having collected $75,000 they decided it was time to give it away with some help from Shaw to capture the reactions.

And so away they went in those big red fire trucks that usually signal trouble when you see them, pulling into parking lots with the air horn blasting, and then when arriving at the local non-profits (the SPCA, the Centre of Hope, the Boys and Girls Club, the Wood Buffalo Food Bank and Unity House) pouring out of the trucks in a tumble of fire fighters and a large mascot and an equally large cheque in the amount of $15,000 for each organization.

I admit it. They weren't even finished with their first stop at the SPCA before I began finding tears running down my cheek. You see my life has been touched by every single one of those organizations, and I know the people behind them who work so hard to serve this community. In our house we have three adoptees from the SPCA, my connection with the Centre of Hope goes back to when this blog began, I have interviewed Howard Rensler of the Boys and Girls Club many times, I serve on the board of directors of the Wood Buffalo Food Bank and I have friends who have been kept safe at Unity House. As I watched them at each stop the tears flowed freely for me, especially as I watched the tears of happiness and gratitude from those people I consider friends and truly valued community members.

As I sit here and write this on Mother's Day I reflect on my own mother, gone for several years now, and the impact she had on my life. My ability to feel that compassion is not innate, but was learned from her. She taught me to love and to feel, while my dad taught me to think and to act. It was a remarkable gift they gave me, a combination of traits destined to serve me well in life, and ones I hope I have passed on to the Intrepid Junior Blogger.

Although they never said it my parents were the embodiment of the phrase: "be the change you want to see in the world". Were they still alive today they would not be the kind to hang out on social media complaining about the world, pointing out all the things that are wrong and done badly, attacking other people (often those working to create change) in an attempt to make themselves feel better about their own lack of action. No, they would be the ones out doing things to make the world a better place, small things perhaps but the things they could do while knowing that while they could not change everything they could change some things. They knew that positive change does not and cannot come from a place of anger and bitterness, and so they focused on doing good, not doing harm. They taught me that if you want to see the world change then you must do it, because you cannot expect others to do it or complain about those who are not doing it the right way if you are not willing to do it yourself. If I have learned nothing else from them at least I have learned that, a lesson that is perhaps the most valuable I have ever been taught.

I thought about them a lot while watching the video, because they would have loved it too. They would have been as delighted as I was, my mother crying and my dad simply sitting there with that smile, as they watched fire fighters coming to the rescue of local organizations who are struggling right now during a difficult time in our community. I want to thank the Fort McMurray Fire Fighters for not only putting their lives but their hearts on the line for us. I want to thank Shaw TV for being there to capture these moments. I want to thank all our local social profit organizations as they are the true heart and soul of this community and I am so grateful to them. But I suppose most of all I want to thank my mother today, on Mother's Day, for being one of the two people in this world who really guided who I have become, and who showed me that love and compassion are qualities that can not only save lives but save our world. Happy Mother's Day to her, always in my heart and soul, as she is a fundamental part of me.