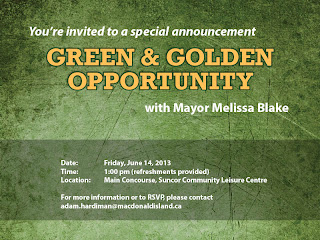 When my boss said that acronym, those three simple letters, I saw the future. CFL, or Canadian Football League - but not in another city. Right here, in Fort McMurray, as the inaugural event at the new SMS Stadium in Shell Place. An idea to bring the Edmonton Eskimos here for their season opening exhibition game in 2015. An idea to kick off the new stadium in a game-changing style. An idea that blew the doors off conventional thought in this community. An idea whose time had come.

You see I remember a time, not that long ago, when people would have scoffed at the idea of bringing the Edmonton Eskimos to town to play. "Where would they play?", they would ask, "A high school football field?" This place has not always been a place of ideas and potential, although it was simmering under the surface even then. Something has changed over the last ten years, though, a shift in thought towards believing in the things we can do - and we believe we can do anything.

There is something special about being in on the ground floor of an idea. To be there at the table when it is first voiced, and then to see it build. To be part of the proposal, and to see it succeed. To watch as you build toward the day it will be announced, all the while sitting on the secret. And then to arrive at the day when the secret is shared with the world, and watch the excitement that falls out of it.

But there is a great deal more to this idea than football, you see. I am, to be brutally honest, not even a huge football fan, but this is about community. How do I know this? I look back to the Northern Classic, an outdoor hockey game that has become an iconic touchstone in this community. What is interesting is that I have never actually heard anyone discuss the outcome of that game. I have no idea who won (I was unable to attend, something I deeply regret now), because while it was about the game it was fundamentally about something else. It was about the experience. It was about community. When I hear people discuss the Northern Classic what they discuss is what it was like - being there in the cold, the outdoor rink, the sense of adventure, the knowledge that they were now part of history - and so too it will be for the Northern Kickoff on June 13, 2015.

This will be the furthest north game in CFL history. It will be the first time the CFL has ever held a game of any sort in Fort McMurray. It will bring the Edmonton Eskimos and the Saskatchewan Roughriders to our community. It will be iconic. It will be history in the making, the beginning of something I am not sure we can even comprehend right now. And that is perhaps the most important part - it is just the beginning.

I am proud to be part of Shell Place and the experience of bringing this new facility to the community. I am proud to have been part of the Northern Kickoff experience too,  but again this is just the beginning. Over the next two years as Shell Place continues to take shape I will be waiting, and watching, and working towards opening day. I will keep in my head this vision I have of the field at SMS Stadium, and watching a season-opening exhibition football game that will forever alter the landscape of my community. I will, on that day, remember back to when MacDonald Island Park was one rink, and a few curling sheets, and my Intrepid Junior Blogger was three years old and just learning to skate. On a weekend in June, 2015, she will be 15 years old, and I will take her to every single event on the Northern Kickoff weekend. She will be part of an iconic, history-making experience in a place that has grown just as she has, and that has been part of our lives since she was so very tiny. She will enjoy the "green and golden opportunity" of seeing the Edmonton Eskimos take on the Saskatchewan Roughriders in her home city - and she will very likely always carry that memory with her, just as I will. And she will know that her city - her hometown, not a boomtown - is a place of excitement, opportunity, potential, and belief.

This is why I live here, you see. This is why I have chosen to stay in Fort McMurray, even when recently we had the opportunity to leave. It is because the IJB and I have our own green and golden opportunity here, not just to see the Eskimos but to be in a place where that is even something that is dreamt of - and then brought to life. We have the golden opportunity to be part of those things, those ideas, and to be part of a community where we can watch an idea blossom into reality - and even, if we choose, be part of the experience of making it happen.

This isn't just about football, folks. Yes, it's a football game, a CFL game, and it's huge and I am tremendously excited and it will make history and I will learn some football basics so I don't make a fool of myself at the game - but it's about so much more. It's about dreams, and ideas, and beliefs, and potential, and opportunity. It's about all the things that make this community who we are - and we are, in the end, one of the most remarkable places I have ever experienced in my life. On June 13, 2015, you will have the chance to be part of history when the Edmonton Eskimos hit the field in the new SMS Stadium at Shell Place. But it won't just be football history made that day - it will be community history, and the beginning of a new era in Fort McMurray, where we know that anything truly is possible under these vast northern lights in this lush boreal forest. It will  be just the start of a new chapter in the history of Fort McMurray.

Hold on to your hats, people - the ride has begun. The future awaits, and it is going to be a helluva ride. Today it is heralded by the announcement of a football game - but the question that begs to be asked is: "What will tomorrow, and the next day, and the next day, bring?" - because anything, truly anything, is possible. And we have just seen the beginning.

The video below relates to another sport, I know. But when I was thinking of a song to sum all of this up, this was it. Tom Cochrane actually played here at MacDonald Island Park, on a temporary outdoor stage on the field where Shell Place is now being constructed. We are, in Fort McMurray, on the verge of something. We are joining the big leagues, in every conceivable way. And it starts now. 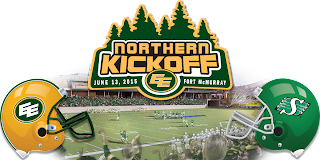