A Flood of Community

Today I was going to write Part Two of my TEDx experience, but that has been pre-empted. It will be written about one day soon, but something else has washed it away a bit, and is a bit more pressing. As much as I enjoyed my TEDx experience and as much as I want to share it this is more important, because this isn't about me. This is about the community, and about our resilience, and our generousity. This is about a flood. 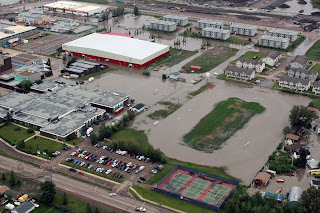 When it first began raining a few days ago I was delighted. We needed the rain to quell the forest fire fears, and to bring some fresh green into the forest. But then it kept raining. And raining. And raining. Suddenly I was making jokes about going home to build an ark, and trying to choose which two of the three ferrets would be allowed in for the ride. But then it suddenly wasn't funny anymore. Highway closures due to washouts were quickly followed by evacuations in Anzac. Lion's Park began to flood, and water began to creep into Heritage Park. I was aghast, thinking of the rich history and heritage in those buildings. And it just kept getting worse. 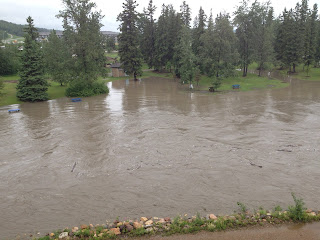 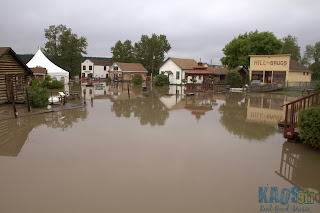 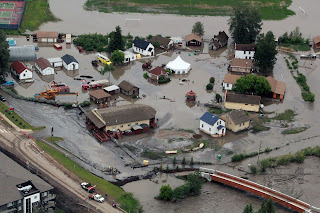 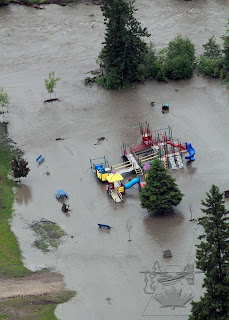 Water began creeping into Keyano, too, the Syncrude Sport and Wellness Centre finding itself under a deluge of water. The picture of the basketball court made me want to cry, that beautiful hardwood floor under inches of dirty brown water. The lobby I have been in so many times, covered in that river water, and the rest of that facility becoming subject to something they could not control - nature. 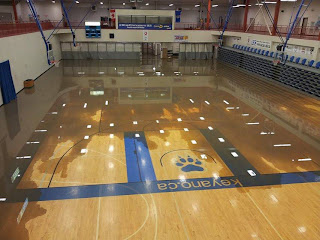 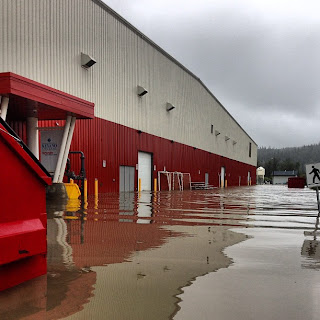 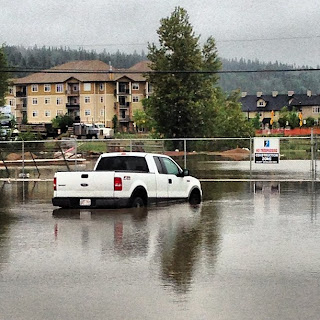 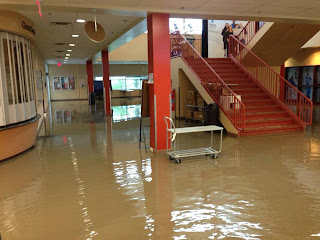 The evacuation notices made my heart pound, because I have been on a short wildfire evacuation notice, and I know how it feels, how your head throbs and your heart feels sick to leave your home when you do not know what you will return to. I predicted the boil water advisory before it happened, knowing that increased water in the system could compromise water safety and purity. The power outages, the traffic jams, the eroded river banks, the fear...I knew it would all happen. But I knew something else, too. I knew how this community, this place where we embrace philanthropy, this place where we build community, would come together to fight the tide. 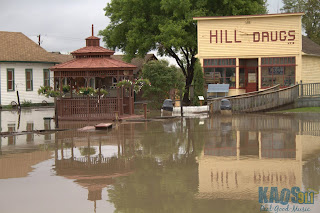 Perhaps we could not physically push back the water, but we could sandbag, and we could offer our assistance. I saw offers of places to stay for those displaced by evacuation, and I saw people asking how they could help, in what small way they could serve others who were affected by this cruel act of nature. 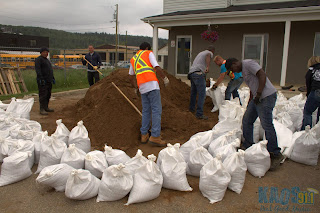 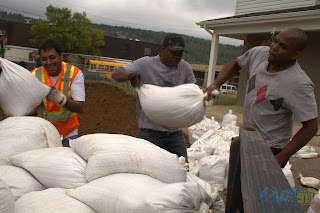 I am proud to say I work at MacDonald Island Park, one of the places that has offered assistance during this time, including opening the doors to members of the Syncrude Sport and Wellness Centre so they could continue their fitness programs unimpeded by the water that now floods their beautiful home facility. But what I love is that it wasn't just Mac Island that opened those doors, but the Wood Buffalo YMCA who too offered a temporary fitness home for those athletes displaced by the floods. It is a collective effort from so many groups and organizations, all of us working for one goal - helping our community in whatever manner we can.

I have borrowed the photos in this post and credited them appropriately, as I did not wish to add to the traffic around the flooded areas. Emergency crews have enough to contend with, and do not need curious bloggers trying to capture photos. And those emergency crews deserve such gratitude and respect, as they are working tirelessly to mitigate the damage, and to keep us safe, just as our leader Mayor Blake has done, who has been communicating with the public in an open and frank manner during a difficult time.

I will be honest. I expected to one day face a crisis in this community. I imagined it would come, and that it would require us to work together. The funny thing is that I expected fire to threaten us, a wildfire that burned out of control, and not flood waters that crept up our river banks and into our homes. Fire is the flashy one, of course, all red hot and burning and fast, while water is quieter and darker and stealthier, creeping in until we are under it.

This story is not over, not even nearly. The RMWB has just declared a State of Local Emergency, a designation which indicates the severity of the situation. There is room for optimism, but too there is more rain in the forecast. All we can do now is wait, and watch - and help each other. All we can do is take care of our neighbours in whatever way we can, because we are all in this together. This is our community, and we aren't only being flooded with water. I think we are being flooded with community spirit as we band together to fight the Flood of 2013, a flood that will live in memory and history as a time of adversity - and community.

And please, please...
stay away from all riverbanks
and waterways.