It's hard to believe it has been almost exactly two years since I met him. It's even harder to believe that two years ago I sat in a restaurant and spoke to him about his dreams for a little bed and breakfast in Newfoundland, a place that would provide employment and opportunities for the people of his beloved home town. I recall his passion for that place, and I recall how important it was to him to see this through, and to give back to the place and people who have given him so much.

"He" is Canadian actor, entertainer, and comedian Shaun Majumder, and the place is Majumder Manor, a bed and breakfast in Burlington, Newfoundland, where Shaun grew up. I was impressed when I met Shaun, and not because of his fame but rather because of his intelligence, his enthusiasm, and his passion for what he believes is important. I was also impressed because when we met he treated the Intrepid Junior Blogger with kindness and dignity, and spoke to her as an adult (and they spoke about pursuing a career in acting and entertainment, something Shaun knows a few things about). So when I heard that Shaun was coming back to town to raise money for Majumder Manor I knew the IJB and I would attend.

Shaun will perform at Keyano Theatre on Sunday, May 12th. I am including the link to buy tickets, and there are only a very few seats left. I would strongly suggest you want to be in those remaining seats, because Shaun is a very funny man. Even more than that, though, Shaun is a wonderful human being, and someone who has impressed me very deeply. The IJB and I will be at the performance, and I know we will both be delighted (probably especially the IJB, as I recall her excitement when she informed me that Shaun had added her as a friend on his Facebook, and even sent her a message). And on a shelf in my kitchen we still have this, from that meeting two years ago: 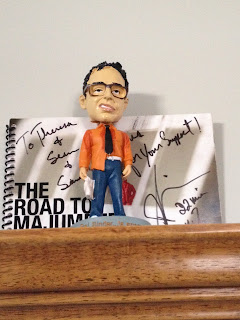 Yes, that's a Raj Binder bobblehead doll (Raj being one of Shaun's unforgettable comedy characters), and a little book about a place called Majumder Manor - a little place that is becoming reality after many long years of planning, dreaming, and love.

Below is my original post about meeting Shaun Majumder and his then-fiance and now wife Shelby Fenner (who is, incidentally, as brilliant as she is gorgeous). Every word of that post is still true, two years later. And frankly I cannot wait to see Shaun as he continues on his journey of Majumder Manor and his career and life. Two years have passed, and much has changed - but my respect for him, and my affection, remain undiminished. He is perhaps what being Canadian is all about. He is all about family, and home, and pride, and passion. And I think just maybe those are the qualities that best describe Newfoundland, and Fort McMurray, and Canada. I hope to see you on the 12th of May - because it is an event to not be missed as Shaun once again connects Fort McMurray with Newfoundland, and brings us all along for the ride.

As I wrote last week I celebrated my 45th birthday on Thursday. It was a birthday celebration I'll never forget as it was an incredibly busy weekend, and perhaps the best part of it was the opportunity to meet someone whose work I have long admired. Not only did I get to meet him but I discovered we share a lot of common ground, too, which made it even better.

A few weeks ago I saw on Twitter that Canadian performer (actor, comedian) Shaun Majumder was coming to my city to do a couple of shows. Not only was he coming to the city he was also auctioning off a dinner with himself and his lovely fiance´ Shelby (the dinner was a fundraiser for Shaun's new business initiative in Burlington, Newfoundland). Not only that but the dinner was scheduled for June 2nd - my birthday. I mentioned it to my husband, and then I pretty much left it alone (although I admit I did check the ebay auction listing a couple of times). I was delighted when on Wednesday evening my husband and daughter informed me that we had indeed won the auction, and we would be meeting Shaun and Shelby on Thursday evening at a local restaurant. It was a wonderful birthday gift, as I have lots of "material" things and have moved into a phase in my life where experiences are worth more than a new pair of shoes (shocking, I know).

Now, when you meet people who have achieved some fame or notoriety you never know what they will be like. I've met a few in my life (like Gordon Ramsay) and have always been absolutely thrilled to discover that they are, generally speaking, just like the rest of us. This was certainly true of Shaun and Shelby, and while initially the dinner was a bit awkward (after all, they didn't know what to expect any more than we did) it quickly became like a dinner with old friends.

We talked about a lot of things. We discussed our families, our backgrounds, and our jobs. Shaun and I talked about creativity - his performing, and my writing. We talked about the city I live in, and about LA, where they live. It became a wide-ranging, engaging conversation, and occasionally we remembered to actually eat something, too. By the end of evening we were quite comfortable with each other, I think, and it had turned into a wonderful birthday celebration.

What especially delighted me was how Shaun and Shelby spoke to my 11-year old daughter. So many adults, particularly those without kids, speak to kids in a condescending way. Not so with Shaun and Shelby - they spoke to my daughter as an equal, and encouraged her to share her thoughts and ideas (and trust me, dear friends, she has many). I think parents are always pleased when someone is kind to their children, and I am no different. I was touched, though, when Shaun took time at the end of the evening to speak to my daughter about performing (a career in which she has expressed interest) and about how if she is passionate about it that she shouldn't give up or let others discourage her. That is true of almost every path in life, dear friends, and I think Shaun and Shelby are people who truly understand that.

We saw Shaun and Shelby again over the weekend as Shaun also kindly gave us tickets to his show (he is absolutely hilarious, dear friends, and his intelligence and creativity shines brightly). We also did a short filmed chat with him for the television show he is now filming for the W Network (it is called "Majumder Manor" and focuses on his project to build an inn in his hometown in Newfoundland).

Dear friends, I am not a celebrity stalker or even much of a watcher. I don't read the tabloids or visit the celebrity-obsessed websites. I do enjoy meeting those celebrities who have done things I enjoy, however, and I am always intrigued to discover what they are truly like as people and not just as people who are "famous". Once again I came away from such a meeting feeling like in general they are people just like the rest of us, with passions and fears, insecurities and strengths, and all the rest that makes us human. What I've also noted, though, is that these individuals typically have a drive and a vision that has allowed them to achieve their goals. That is a quality that I try to emulate, and one which I certainly want my daughter to see. In Shaun she saw someone who came from a very small town in rural Newfoundland and followed his dreams to become a funny-as-hell, intelligent, talented, accomplished, and beloved comedian and actor. In Shelby she saw someone who is an absolutely drop-dead gorgeous, brilliant, well-spoken, successful role model for young women (showing her that a woman can be all those things without needing to sacrifice one for the other).

It was an incredible opportunity, dear friends, and I walked away feeling like we had made a connection with some other human beings who, while they lead a very different life from mine, aren't all that different from me. Aren't those connections what life is all about, really?
at May 05, 2013