Finding Hope in the Dark 2013 in Fort McMurray

It's cold, it's dark, and there is an incessant buzzing noise in my ear as a mosquito has somehow managed to find a way inside my two sleeping bags, including the one I have wrapped around my head. I am warm, but the bags feel damp and so the warmth is a moist kind, warm but uncomfortably so. My right hip hurts from pressing into the ground, but I have been reluctant to change position because of the risk brethren will join the lone buzzing mosquito if I move. It has been a couple of hours since I peeked out to see the northern lights, and now, at 3 am, the birds have already begun to sing. It has been a long night, although I did not see the inside of my bag until 1 am. I find myself thinking about my life over the last year, and I realize that moment has arrived again - that moment at 3 am when all else has faded away, the laughter with friends and the good feelings, and I find myself alone. It is my second annual Hope in the Dark night, and I am sleeping on the ground to understand, just a tiny bit, of what it feels like to be homeless in our community. 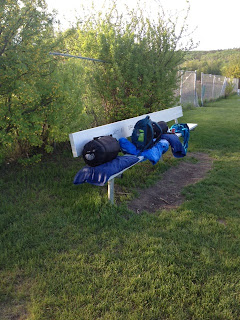 This year is different than last year, too. This year there is a box beside me, a box that has collapsed overnight due to the weight of the morning dew and the shifting of the person inside the box. Inside the box, you see, is my daughter, the Intrepid Junior Blogger. This year when I asked if she wanted to do this event with me she not only agreed but insisted, even when I had second thoughts as mothers sometimes do and tried to dissuade her. But she would not be dissuaded. She wanted this experience, to see what it was like, and to share it with me. 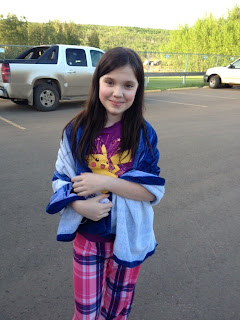 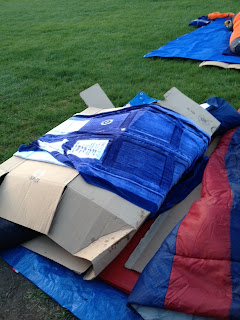 And so last night we found ourselves in the park behind the Clearwater Public Education Centre, on a lush grassy field. We were surrounded by friends, and thanks to the security patrols provided by the Centre of Hope, who hosted this event, we were safe. But just as last year it was a sobering experience for me, and this year I think the IJB saw with new eyes what I had seen last year. She saw what it means to be homeless. 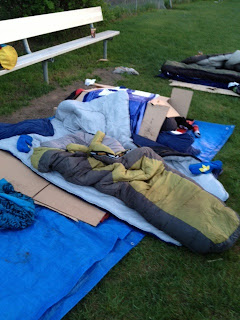 The evening began with a BBQ, hosted by Atco Gas (and I must thank them for this generosity and kindness, and let them know that they and their staff have now earned a place in my heart). There were some speeches, from Councilor Al Vinni who delivered a message on behalf of the mayor, and I was honoured to be asked to read greetings from MLA Don Scott. The executive director from the Centre of Hope spoke briefly about their work, and about the nature of homelessness, and then a short video from my friend Ashley was seen, a video depicting some of the numbers around homelessness - the numbers of socks handed out, the numbers of patrons the daytime dropin program at the Centre of Hope sees. And then, in the form of tiny electric candles, another number was displayed. 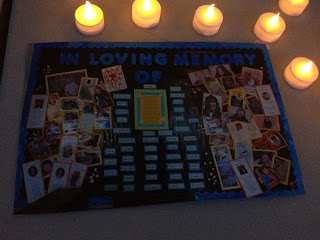 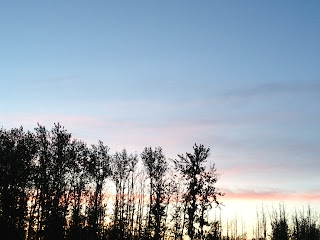 The evening passed quickly last night with good friends, and with strong connections. Some of us had done this last year, and so we were well prepared with extra socks and mittens. I finally took the advice of Phil Meagher and abandoned my bench as he said it was colder to sleep that way, and instead we laid down a tarp in front of it. On top we placed a mat that Phil had so kindly lent us, and then our bags, and the IJB's box. 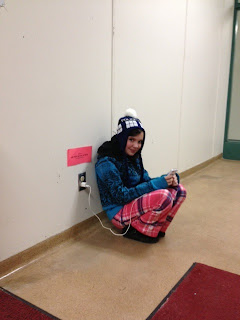 When the IJB climbed inside her box it was dark. She had in her hands her iPhone and her Kobo, the trappings of a thirteen year old girl. At her side was a flash light, and she looked cozy, although the box kept collapsing, which frustrated her. When she finally went to sleep, full of hot chocolate kindly brought to us by those who visited through the night, I watched her for awhile, unable to sleep while my little girl laid there in a box. It was an uncomfortable feeling for me as a mother, because I have met young women on our streets just a couple of years older than she is. They told me of dark events in their lives, substance abuse, and the kinds of assaults that both angered and frightened me. I watched my daughter fall asleep, and I thought of those young women, and about the terribly thin line that divided them from her.

When I finally fell asleep I did so while watching the headlamps of the security patrols, who watched the perimeters of the park carefully. When I awoke at 3 am I could not hear any other sounds, except the singing of the early birds, and the beating of my own heart. And that is when I began to take stock of my life, and the past year when so much had changed for me.

Eventually I crawled out of my box, and sat on the park bench where I had slept last year. I sat on my pillow, looking at the collapsed box that contained the person most precious in the world to me. I watched the morning dew as it formed on my sleeping bag, and I watched a small robin as it hopped in the grass. The large trucks down at the Snye began their engines at about 4 am, and I watched them too. I watched a beautiful dawn unfold in front of me, and as I sat there and watched all this I felt both peace and disquiet. I felt peace because of how my life is unfolding, and because of my own contentment with the world. And the disquiet? Well, that came from the stark realization that those who do this every night, sleep rough, probably have a hard time appreciating the beauty around them. I suspect that when you are fighting to survive that your sense of appreciating beauty falls away, and your focus shifts to getting through the day - and not joining the forty-three who have not survived life on our streets in the past seven years.

I watch my daughter's box with a special sense of disquiet, because I do not know where her life will go. I think I know, I think I have an understanding of it and her potential, and I have hope and belief - but I know all too well that things can happen to change us and alter the trajectory of our lives. And this shakes me to the core, and brings tears to my eyes, because I want this to be the first, and last, time my little girl ever sleeps in a box in a park. I sit on the park bench and tears run down my face for a few moments, and then I see that coffee is being served in the parking lot up above and I walk - no, run - towards that which I hope will warm my hands and shake me from these troubling thoughts. 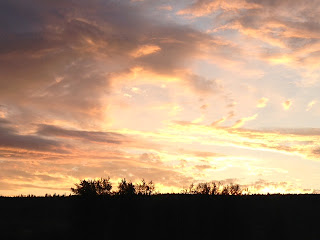 At 6 am I descend back into the park, and I shake the box where my child sleeps. I tell her it is time to wake up, and her face appears, groggy and disoriented. She looks like she has slept, and while we gather our things she tells me of her night.We pack up our car, and say our goodbyes, and then we head home. 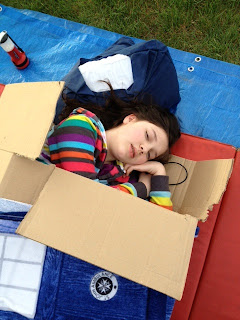 I ask her how it went, and how she liked it. She answers that it went fine, and that she actually liked sleeping outdoors in her cozy box. And then I ask how she would feel if she had to to it every night, not by choice but by circumstance, and her face changes, clouding over. No, she says. No, she does not want to sleep in a box every night, and once we are home she climbs into her bed, surrounded by warm fuzzy blankets and the stuffed animals that remain from her childhood years.

I sit in my car for a moment when we get home, and I think about how I never want my daughter to experience true homelessness. I think about that moment at 3 am, and about how I don't want her to wake up in a box some day, afraid of becoming a statistic, like the number forty-three. I think about all the homeless in our community, and the fears and challenges they face every day, and about how I doubt any of them ever expected to one day find themselves sleeping in a box. I think about my daughter, and them, and it all tangles up in my head. I drag myself out of my car, and into my own warm bed, where I fall asleep thinking of collapsed boxes, and hope, and the number forty-three. I fall asleep at home, with my daughter in her own bed safe and warm, and my heart hurts as I think of those who have no home, and for whom hope may seem a thing so hard to find at 3 am, when the world is dark.


My sincere thanks to
the Centre of Hope
for organizing
Hope in the Dark 2013 -
but more importantly
for the work they do every day.
You have my heart - and are home to my hope.

My thanks to Marshall, Ashley, and Stacey
young citizens who joined with the COH staff
to organize this event.
People like you are the future of this community
and I am proud and honoured to call you friends.
Thanks especially to those who patrolled all night
who kept me - and especially the IJB - safe.

Thanks to ATCO Gas for the BBQ -
and for being such great community partners.

Thanks to all the friends, old and new, who joined me this year -
Ken, Christina, Steve x 2, Cassandra, Terrance, Matt,
Shelley, Diana, Tammy, Al, Phil, and all the rest.
Together we braved a night in the cold
and found hope - and understanding - in the dark.

But my greatest thanks go to my daughter
the Intrepid Junior Blogger, aka Sam.
She is my hero, my inspiration, and my heart.
She is my hope in the dark.
She is the reason I want the world
to find compassion and understanding.
I want the world to know
that the homeless person they see
is someone's child - and I want them to treat them
just as we treat our own precious children. 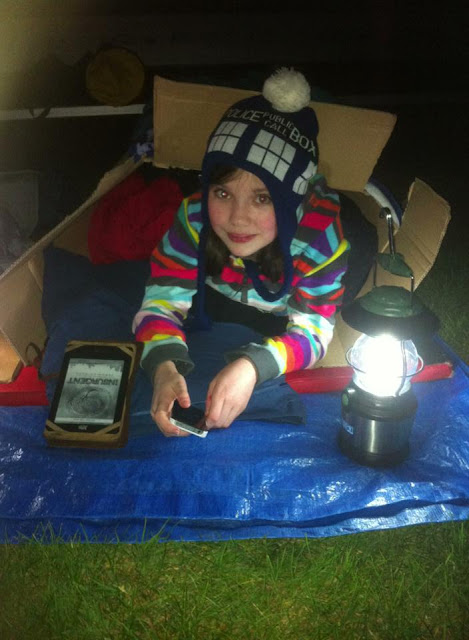 This video was played at the event last night...
and reminds us that we have all had our days in the sun, and
had our moments when we shone.