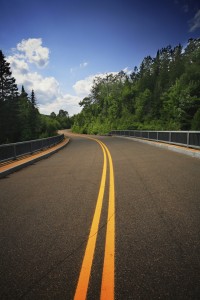 I love the people of this community. I really, really do. I feel I must preface this post with that as on occasion I think dark thoughts about this crazy place I call home, and while the thoughts are there they are fleeting. I thought those dark thoughts recently, however, thoughts that ran a lot like this: "oh, just shut up".

It all started when the snow and ice came off the roads, leaving several areas without visible lane markings. It was particularly bad in the construction areas on Highway 63 through the city, with driving becoming more and more like a daily guessing game. I saw people making three lanes where I am quite certain there are only two, and I witnessed so many close calls when people meandered about, not entirely sure where their lane was. And the chirping began on Twitter and Facebook, people complaining about the lack of lines and the inherent danger of letting the driving public just make them us as we went along. And frankly I was one of the chirpers.

Now I, being me, didn't stop with the chirping. No, I sent a message to the offices of the Ministry of Transportation for the province. I advised them of the situation, the risk I felt it represented, and then asked who was responsible and what was being done. Within a couple of hours I had my answer, which was that as soon as the temperatures warmed up lane marking and line painting would begin. I was delighted, of course, because clearly this was already in the plans and soon we would once again have lanes and not be quite as likely to engage in spontaneous games of bumper cars.

I suppose I was quite naïve in thinking that the chirping would stop when the lane marking and line painting began.  I was, therefore, overcome with a rather dark cloud of rotten thoughts when I saw on Twitter and Facebook that people were complaining about traffic delays...due to lane marking and line painting. Suddenly the adage "damned if you, damned if you don't" sprang to mind, and I began to think I knew a bit about how politicians must feel. It seems, in fact, that you just can't win.

Look, people. I know we all like to complain about traffic, but when it comes to line painting I think it's short term pain for long term gain. And I'd prefer they didn't do this at night because I rather like the lines straight and done well so they don't have to do it again.

So, I love y'all and you know it. But on occasion when the chirping starts I cannot help but think "oh for the love of god please shut up". That feeling doesn't usually last long, but it seems I have a lack of patience when it comes to some things. For some that lack of patience happens when they are stuck behind line painting equipment. For me it's when I'm stuck behind those chirping about it.


Lane marking and line painting continues on local roadways.
Just deal with it already.﻿
at May 08, 2013