I caught a flash of red in the corner of my left eye, I guess. I had no idea that they - he or she, I have no idea - would dart out into oncoming traffic that way, forcing me to slam on my brakes to avoid hitting them in a T-bone fashion. I could feel the grinding of the antilock brakes, could feel my blood pressure rise, could feel anger seething in an instant. That flash of red was a vehicle that pulled out in front of me from a driveway despite their view of the thoroughfare I was on being obstructed. There was no way they could see me coming, but instead of inching into traffic as the more cautious would they darted out, and I missed hitting them by mere inches. And it was terrifying.

I am incredibly grateful the ice and snow is gone from the pavement, or I would have surely slid into them, or someone else. I was grateful my brakes are in good shape and I was able to stop in time to avoid them. I am grateful for the witness who later assured me that it was not my fault, that they saw the entire thing, and that they were terrified, too (I am one of those who if you hit me am likely to apologize to you as I am always so intent on never making anyone else feel bad, even if perhaps they should). The whole episode left me shaken, and upset, and angry, and very, very sobered to the reality of how a split-second can change your life. You see, it's split-seconds like this that end lives on Highway 63.

I am sure the driver of the other vehicle thought it would be fine, decided to take a chance even though traffic obstructed their view and they could not see what was coming at them. I am sure they grew weary of waiting and decided to take the opportunity - and risk - of darting out into traffic to get across the thoroughfare. I do not know if they drove away feeling terrified like me, or if they felt terribly clever about it all (and some people do when they take such risks). All I know is that decisions like that, made in other circumstances, can - and do - end lives.

I was deeply grateful the Intrepid Junior Blogger was not in the car with me. I wonder if there were children in the other vehicle who had just been put at risk, and not of their own choice - because of course when we take such risks we imperil not only ourselves but those who ride with us, and those who are in oncoming cars like me.

I realize we all make mistakes, and perhaps the red vehicle drove away chastened and terrified too, vowing to never take such a risk again. I know I drove away thinking about defensive driving and thanking the stars that I was both lucky and cautious. I too know, though, that I am as prone as anyone to bad choices and taking risks, and so I also drove away resolving to think through any such choices in the future.

I spent a lot of last night thinking about the accidents on Highway 63, and the victims. I thought about how some of them must have seen the oncoming cars about to smash into them. I wondered if they saw the faces of those other drivers, the ones who had made bad choices. I thought about that moment of terror, that feeling of panic and fear. I thought about how a single bad choice can end lives - that of others, or your own. I thought again about how safety - on highways, and in parking lots - is the responsibility of all of us, and how we are so reliant on each other making the right choices.

I never saw the face of the person in the red vehicle. It was too fast, just a glimpse of red before it was gone, me left with my foot firmly planted on the brake and feeling a maelstrom of emotions directed at a stranger who came very close to crashing into my world. It was a sobering experience, a close call in a parking lot, and it reminded me of how bad choices can change our lives in a split-second. It left me shaken - and determined to continue to speak out about how all of us are responsible for the lives of others. As soon as you step foot in a car, turn the key, and grab the steering wheel you have become a potential agent of death should you engage in bad choices. I think that is a lesson we all need to remember. I remembered it last night in the Extra Foods parking lot as I stared in terror as a glimpse of red shot past my windshield and into the night. 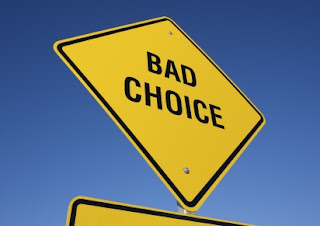