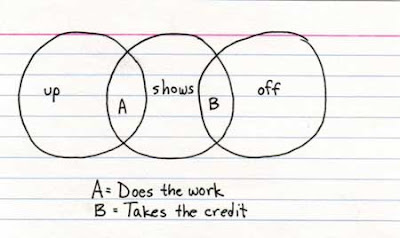 One of the things that really irks me is people trying to take credit for things they did not do. I suppose it is human nature, as we all love success, but when others - and particularly politicians - try to claim credit for things they did not actually accomplish it drives me bonkers. And so it was last night on Twitter when I noted an opposition MLA in the provincial government was trying to claim that pressure from the opposition helped to force the twinning of Highway 63. This is such a preposterous claim, and today I will show you why.

People in this region have been clamouring for the twinning of Highway 63 for years, and long before the formation of the party that is now in official opposition. The real push to get it done, though, came almost one year ago now on a day in April when seven people died in a horrific collision. The provincial election was just over, the ink not even dry on the papers reporting the win by the Progressive Conservatives. The government had not yet even had a session when this accident occurred, and I suspect many didn't even know where their offices were. But something did happen after that accident, and it wasn't an uprising from the official opposition. It was an uprising by the people of this region.

The credit for securing the commitment to twin Highway 63 should not go to the parties in opposition in the provincial legislature. I did not see one of them at the Twin 63 Now rally, a rally that drew numbers unprecedented in this region, and that showed a social activism we have not really witnessed here before. They did not plan that rally, they did not invite the media to it, and they did not fight to make it happen. Two young women named Ashley St. Croix and Nicole Auser did that, and thousands of people came to that rally on a busy Saturday afternoon in May. I know because I was there, too.

I did not see the opposition parties start petitions that garnered thousands of signatures, signatures of those who demanded to see a commitment to twin Highway 63. They did not drop those petitions off at local businesses, and sit at events with a pen in their hand asking every passerby to sign them. That was Annie Lelievre, the mother of a young man lost on Highway 63. She fought tirelessly to see the commitment to twin Highway 63 made. I know because I know Annie, and I saw how hard she fought, even when it seemed she had no more fight in her.

The opposition parties did not write thousand of emails or letters to those in power demanding the twinning of Highway 63. They did not start websites devoted to those lost on the highway. They did not shout out to the universe that this needed to happen, and that it needed to happen now, and that if it did not happen that they would continue to shout. No, that was not a group of politicians who did that. That, people, was us.

Do I think some credit should go to our local MLAs, Mike Allen and Don Scott? Yes, I do, because they carried our voices to the legislature, and they were able to share our anger and pain with their colleagues. They were able to act as the messengers for our demands, and they undoubtedly played a role. But the real credit for securing the twinning of Highway 63 should not go to politicians, and I will never allow them to take credit for the work of Ashley and Nicole and Annie and the thousands of others who truly made this happen. The real credit for all of this goes to you, the people of Fort McMurray and beyond, the ones who wrote letters and attended rallies and signed petitions. The real credit must go to the people.

One day in 2016 I hope to be there when they open the newly, and completely, twinned Highway 63. I want to be there for two reasons, you see. First, that little ribbon of road has become intertwined in my life, a topic I have written about, talked about, thought about, and cried about more often than I care to admit. And second I want to be there when a politician of any stripe tries to take credit for making it happen (let alone politicians who didn't even show up at things like a memorial rally). I want to be there to remind everyone that in this case the ones who made this happen were not politicians or industry executives. I want to be there to remind everyone that the credit for this life-altering event (and it will be life-altering for those who have their lives saved by twinning, although they may never even know it) belongs to the people of Fort McMurray who made it clear that they would not stop and would not give up until they saw it happen. This was not about elections and votes and promises and false political outrage over an issue - this was about a community that had seen enough crosses, heard the siren of enough ambulances, and cried enough tears. This was about an entire community that came together to make something happen to save lives - and I will fight to make sure that they get the credit that is due to them and not see it stolen by someone wishing to score political points. The commitment to twin Highway 63 was not a victory for government or opposition or any other political party - it was a victory for the people of this region who made it happen. And I would suggest that anyone who thinks otherwise - or who tries to take credit for it - should reconsider, because I will be happy to remind them of who should really be taking credit on Highway 63. 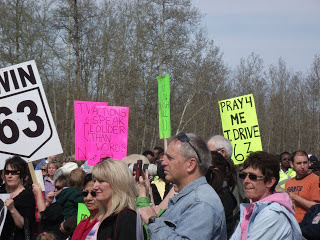