While I was on the plane I was remembering a time in my life over a decade ago, before the Intrepid Junior Blogger was born. It was a time when I lived in a small gold mining community in northwestern Ontario, a placed called Red Lake. While living there I stumbled upon a job that sort of changed my life because it introduced me to a love of flying, and a love of the true north. You see I worked for a very small airline called Bearskin Airlines, one that flew into large centres like Winnipeg and Thunder Bay. But Bearskin also flew into much smaller places, places with names like Pikangikum and Keewaywin. These places, fly-in First Nations communities, were part of the airline's daily schedule, and so I learned so much about them, and about the people who live there.

This week memories of those remote places returned to me when I found myself on a plane headed north of Fort McMurray to Fort Chipewyan. It was a single propellor plane I flew on, not so much different from the twin propellor planes we had flown at Bearskin, and the ride was very similar, over vast northern terrain of majestic beauty. I got to see, finally, the site of the massive Richardson ground fire from a couple of years ago, now a blackened expanse of forest waiting for the day when the first green shoots of life begin to appear once more. I got to see boreal forest, and the winter ice road from the air, a road I have never travelled on but heard so much about. And I finally got to see Fort Chipewyan, a place that I am ashamed to say I have never been in my decade living here. 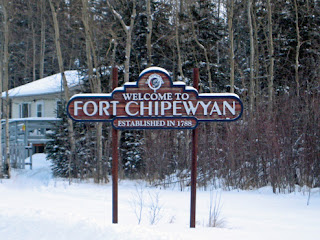 Why ashamed, you might wonder? Because Fort Chipewyan is beautiful in every sense. Before I flew there this week I went online and did some reading, wanting to know the history of this community, hungry to know the past of this place. I learned that it is Alberta's oldest European settlement, established in 1788 (and I can't even imagine the hardy nature of those who settled there then, and the aboriginal peoples who were there long before). I learned that it is an area rich with history, and then, when I landed there, I learned it is a place rich with something else, too - people.

Landing at the Fort Chipewyan airstrip reminded me so much of all those times I landed in far northern places with Bearskin Airlines. Surrounded by forest, colder than Fort McMurray as that little bit further north made the temperature drop, still lots of snow on the ground - it is a stunningly beautiful place.

We had a very brief drive into the community, a chance to glimpse a stone cairn high on a hill and the local museum where I am told there is someone who can talk for hours about history, and heritage. We had a chance to see a bit of the community, the houses and the school and the various buildings. For me, though, it was meeting the people of Fort Chipewyan that sealed the deal. You see "the deal" is that this summer I intend to return to Fort Chip but for pleasure, not business, and with the Intrepid Junior Blogger in tow - because there is something about this place that I want her to experience, too. 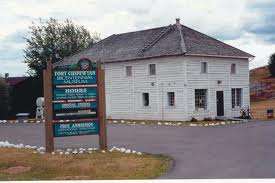 I had so many friends in those places in northwestern Ontario, and I realized this week how deeply I miss them. I miss their kindness, and their generousity of spirit, and the way they always made me feel welcome. This week I felt that way with the people of Fort Chipewyan. When I told them this was my first time there they would respond "Welcome to Fort Chipewyan!", said with a beaming smile of pride - and genuine welcome. They told me a bit about their lives there, and about how it is so incredibly beautiful in the summer months. As I spent more time there I missed those places in Ontario more and more, realizing it had been far too long since I had thought about them - and far too long for me to have not visited Fort Chipewyan.

So, as I sat on a plane late that night, tucked into a little seat and enjoying the dark flight out of Fort Chipewyan I resolved to return there when the trees are green and the water no longer frozen. I will fly with my daughter over the site of the Richardson ground fire, and we will remember the summer when it burned, and perhaps we will see some green among all the charred black. We will see where the ice road runs in winter, and we will land at an airport in the far north of Alberta, in a place where Europeans settled in 1788 (and where aboriginal peoples were long before). We will go to the stone cairn, and spend time in the little museum to hear the history. We will explore the lake and walk in the community - and we will meet the people, because I want her to experience the things I have in my life, the people who live in such far northern places. I want her to meet the children and the adults and especially the elders, and listen to their stories. I want her to see that the rich tapestry of life in this part of Alberta is about so much more than Fort McMurray and what is right outside our front door. I want her to head far north with me, and spend some time in a place - and with people - that captured my heart in mere hours. I want her to see the beauty of a place and people that are an integral part of the history of this region, and this province. I want her to understand the importance of places like Fort Chipewyan and Pikangikum and Keewaywin and all those "remote" communities which may be far from us in miles - but close to us in our hearts.


My deep thanks to
the people of Fort Chipewyan
for welcoming a visitor
and making me feel at home :) 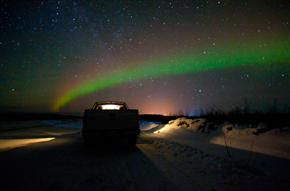