Ski For Hope - And Dare to Dream in Fort McMurray 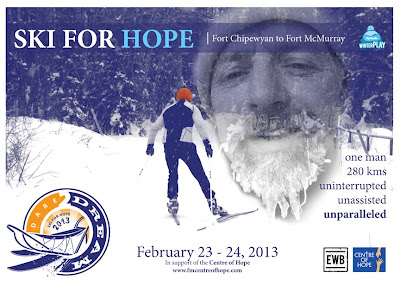 I suppose I first met Phil, at least really met him, last year when I participated in the "Hope In The Dark" fundraiser for the Centre of Hope. The Centre of Hope, you see, is a humble little building on Franklin Avenue that does far from humble things. As the daytime drop-in centre for our local homeless population they take care of individuals too often forgotten, neglected, or, even worse, rejected by this world. They have my heart, the staff and patrons of this place, so when they planned an overnight awareness event to raise funds and help people experience the nature of homelessness I said yes - and so did Phil Meagher, and his son.

Phil is many things - a RMWB councillor, a father, a husband, an employee - but he is also someone who is touched by the plight of others, and I have seen this first hand. He too is touched by the homeless in our community. He is often found at events that support the Centre of Hope, and so when this year he launched a little adventure to help them raise money I was not surprised, although the nature of it surprised me a little bit.

You see a few years ago my friend Blake Crossley dreamed a little dream, and his dream was to run from Fort Chipewyan to Fort McMurray on the ice road, towing a dog sled. He formed a team, and one of those members was Phil. Due to a convergence of so many circumstances beyond their control - weather, health, the realities of life that gets in the way of our dreams - the run never happened. It was devastating for the team, I suspect, because the dream was a good one. The team, known as the Dare2Dream, had hoped to inspire local youth to follow their own dreams, and raise money for athletic supplies for the youth in Fort Chipwyan. Each member of the team went on to dream their own dreams, to follow their own paths, never forgetting that they had dared to dream of running from Fort Chip to Fort McMurray. And this year, in an attempt to follow his dream of that adventure, Phil Meagher decided to complete his part of the journey, and ski the distance instead.

It hasn't been easy for Phil. He had a hip replacement some time ago, and there is a recovery associated with that. I suspected something was up when he began to talk about his ski training, because there was an intensity to it that heralded a plan behind it. He would post photos of his face, covered in snow and ice, because he was training in frigid temperatures. He would talk about the distances he had skied, and I began to realize something more was going on here than a simple love of skiing. And so it was - it was a love of the Centre of Hope.

I was at the press conference when Phil announced that he would be skiing, alone, from Fort Chip to Fort McMurray on February 23. It would take him hours to accomplish this, hours in the dark, cold and alone. And as he spoke at the press conference I remembered a night spent in a park in downtown Fort McMurray where I played at being homeless, and where even surrounded by friends I felt alone. I remembered how cold I was that night, even though it was late spring, and how I felt a bit frightened. I remembered how I had access to a warm building that night where I huddled, iPhone plugged in, texting a friend my worries. And as Phil spoke about his ski journey I realized he would be alone, and cold, and with no refuge of warm building or friends. As he spoke he compared it to the experience of homelessness, and he was, of course, right. And as he spoke I, of course, as is my usual habit, found myself crying.

Phil announced that he is doing this to raise funds for the Centre of Hope, and so he is. The team also took the original funds raised and have purchased skis for the youth of Fort Chipwyan so they can experience the love of that sport, too. It is one of those dreams that encompasses so many things, good works for others and good works for the ones who dare dream it, because it is those dreams that keep us alive, I think. Without dreams we are not really human, because perhaps what truly sets us apart as a species is our ability to dream this way.

I hope to be at the finish line when Phil and Blake arrive in Fort McMurray, to see their dream realized. You see I am so very proud of them, and the rest of the original team, because these people are what is best about this community. These are the ones who dare to dream and who despite adversity and challenge and setbacks continue to dream it and pursue it and try to find ways to make it happen. They do not give up, and in this way they remind me of my friends at the Centre of Hope, the homeless ones who refuse to give up even when the odds of life, both those thrust upon them and those of their own making, seem stacked against them. In their resiliency I find courage, and so too I find it in people like Phil Meagher. I find in them the courage to follow my own dreams, to refuse to give in to the challenges of life, and to find ways to make my dreams happen even when they seem out of my grasp. I am proud to know people like this, you see, because they are the reason I believe in courage at all.