I have had the opportunity to meet our Premier several times, and say whatever you want about her politics - she is a unique individual. I find her intelligent, engaging, clever, funny, and truly inspiring. She reminds me, as I said on Twitter that day, of Margaret Thatcher, just in her strength and determination, so reminiscent of the Iron Lady of England. And I don't think I'm the only one who senses this, either.

I knew when the Premier had entered the room at the Convergence YMM Conference because the noise level suddenly dropped. A room full of conference attendees that had been merrily chatting away suddenly hushed, and it wasn't just because she is the Premier, at least not in my mind. She has a presence, which was further evidenced when she took the stage and began to speak about the value and importance of the non-profit sector. She spoke for some time, and the audience was completely transfixed - you could, quite literally, hear a pin drop. You see she has a way of connecting with an audience, and a way of making you want to hear what she says. It was an excellent speech, about how non-profits are important partners in the development of community, and the responsibility government has to ensure they have what they need to function. And while it was a good speech it was what happened at the end of it that truly made me smile. 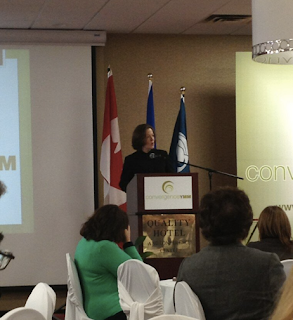 In the audience that day were two remarkable people in our community. Diane Shannon, Executive Director of the United Way, is someone who has done some incredible things with that organization, and it serves as the backbone of many of our social profits. And then there was young Nathaniel Crossley, humanitarian, fundraiser, and eleven year old student. These two individuals, different in age and gender, have some very fundamental similarities, too. They are both humanitarians, they both believe in making the world a better place for others, and they both received medals recognizing their good works in this community.

First up was Diane, and it was truly lovely to see her receive her medal in front of her colleagues and peers, those who know well how hard she works and what she has accomplished. And then it was Nathaniel's turn, and I will admit that I had tears in my eyes when I kneeled down in front of the stage to capture that moment. You see I have gotten to know Nathaniel and his family very well over the last couple of years, so much so that I consider them family, too. He was so excited to meet the Premier, and to see him receive his medal from her was an amazing moment for me. I am told he received a standing ovation from the crowd, those who work in our social profits and who understand the sort of passion and commitment Nathaniel feels about what he does, but I did not see them stand and clap for him. No, you see I was so focused on his beaming face, on that precious smile, that I did not see anything but him for a moment. It was quite truly his moment to shine, and he did. 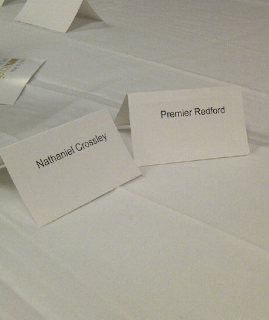 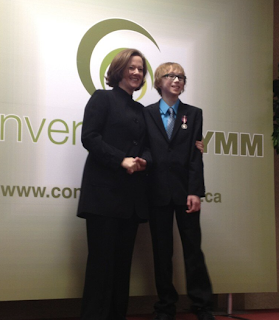 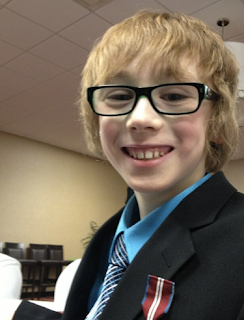 When the Premier left the conference she didn't go to meet industry executives or local politicians. No, she went instead to two of my favourite places in this community - the Wood Buffalo Food Bank, and the Centre of Hope. Accompanied by MLAs Don Scott and Mike Allen she packed a food hamper at the food bank, something I too have done. And then she went down to what used to be the little blue building on Franklin Avenue, the place where I often find my heart when it has gone missing. She went to the Centre of Hope, and she met with the staff there - but also with some of our homeless population, our citizens that are too often forgotten and overlooked. 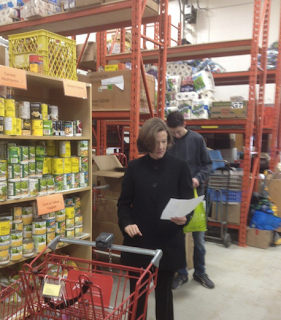 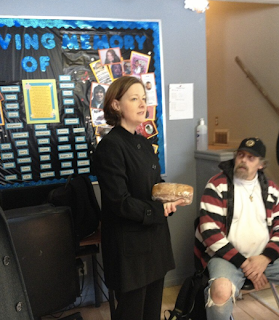 I am told the Centre of Hope patrons were excited to meet her, and I can only imagine. I can imagine their smiles, because you see these are people who are often treated without regard to dignity and respect. They are often viewed with suspicion and disdain, so to have this special visitor chat with them, to give them the dignity and respect they deserve, and to accept their precious gifts (that they made her gifts makes me cry a little, honestly) must have been a very special moment for many of them. You see they don't care about her politics, really - all they care about is that someone cares enough about them to hear their stories, treat them kindly and gently, and attempt to understand their lives. Political ideology falls away in those moments, and I know that well because I spend time at the Centre of Hope, too.

In a jam packed day the Premier then granted some local media some interviews - and one of those local media types included me. I always find it an honour to interview those I respect, and when I ran into another local media type later they asked if I had spoken to the Premier about the usual things - the highway, infrastructure, taxes? I laughed and said no, and when they asked what I did talk to her about I explained we discussed local social profit organizations, and an eleven year old philanthropist that impresses everyone he meets.

And you see that is what the Premier and I did discuss. She commented on all the strong people, particularly the strong women, who run our social profit organizations in this community. She spoke about how the provincial government needs to be an equally strong partner in these relationships, providing the support these organizations need to do what they do every day. Her understanding of the importance of the role of social profits was very evident, and frankly it is a relief to me because we need individuals in power who understand that role, and the value. And yes, we spoke about Nathaniel Crossley, who she referred to as "a cute kid", and we talked about engaging youth like him in community, and giving them the opportunities to explore the world of humanitarian good works and leadership. I told her that Nathaniel is a fundraiser, humanitarian, philanthropist, AND video game junkie, and we both laughed, moms who both have children ourselves and know that no matter what else they do they are, in the end, kids.

It was a lovely interview, brief but compelling for me, and then it was on to my, and her, final event of the night in Fort McMurray - the Enbridge Famous Five Speaker Series.

The "Famous Five" are well known in this province, and this series aims to bring inspiring women to our community to speak about the challenges and opportunities this world presents. That night, in a packed room at MacDonald Island Park, the Premier spoke about women, and about the Famous Five. She recounted anecdotes about her mother, and her grandmother, and she shared her belief that we need to provide leadership opportunities for young women so that they too can follow in the paths of the Famous Five. She spoke about how we have made great strides as women, but how there are still challenges, too. She spoke most, though, about the opportunities and potential that exists, and in my mind those are more prevalent in this region than anywhere else in the country, and perhaps the world. We have so many women here in leadership roles, strong individuals who inspire others like me. We have women in non-traditional professions, but who do it quietly, never making a big deal that what they are doing would be considered absolutely remarkable in some parts of the world even now.

I was thrilled when the Premier entered the room and waved a hello at me. You see, I will freely admit I have deep respect and admiration for her, and for many reasons. I am a fan of strong women, women of courage and passion and vision and drive. And she and I have some similarities. We are both parents of one daughter, and I suspect like me her daughter is the centre of her world (they have a way of doing that to you, it seems). She lost her mother unexpectedly a couple of years ago, and that has happened to me as well, and I know all too well the pain of losing someone that way, especially the mother who has inspired and nurtured you. She is a woman of passion and vision and drive, and that is what I aspire to be - and she is a feisty and opinionated redhead, something which has, on occasion, been said about me, too.

That night when she had left to head back home, her jam-packed day not yet over, I also headed home, but my day was done. I went home and recounted the events of the day to the Intrepid Junior Blogger, and she and I talked about how fortunate we are to not only have a strong woman as Premier, but a strong woman as leader of the official opposition (and while I have not met Danielle Smith I would love to, as I think she is yet another one of those women of passion, vision, and drive), AND a strong woman as our mayor in Melissa Blake. We talked about how this province once had the reputation of some "old boys club" where girls need not apply, and where leadership was considered the exclusive domain of men, but how this has been turned on its head, and how three of the most powerful leaders in this province are women. And then I showed the IJB the tweet that the Premier sent to me that day, and my reply to her, and we both smiled. You see at the end of the day I don't do what I do for gratitude or recognition, but because I am so passionate about this place. And the tweet I sent to the Premier summed it up very nicely - because what I do is so easy because of all of you. 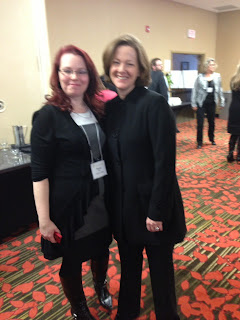 Happy Valentine's Day, Fort McMurray.
Consider this post my love letter to you,
because you are the place that has my heart. 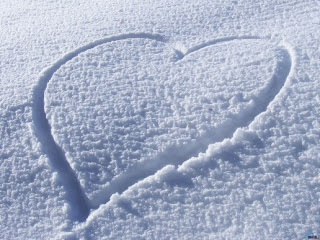