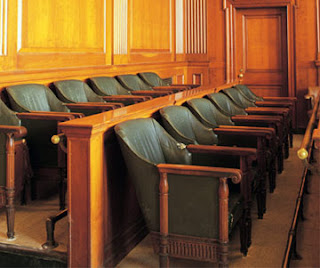 Okay, when the jury summons arrived I admit I probably reacted differently than most people. I've heard other people sigh, or complain. Me? I jumped in the air and pretty much yelled "Yippee!".

It's probably too many years spent watching "Law and Order", or having lawyers in the family. I've always been fascinated by the legal process, but have never had much reason to be in a courtroom (well, not that I'm sharing here, anyhow). And in all my years spinning around the sun I'd never gotten a jury summons, either. I was quite excited, a little intimidated, and a little worried about the nature of the trial. So, I filled out the form indicating my occupation, sent it off, and eagerly waited for the morning I was to report to the court house. 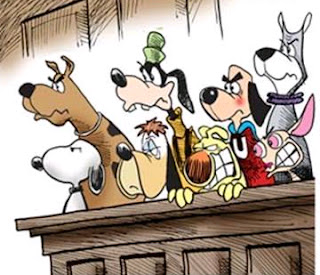 While I waited I told a few friends I'd been summoned. The RCMP officer I told was very gentle, but basically told me I didn't stand a snowball's chance in hell of ever sitting on a jury. He wouldn't say why, but said he didn't think it would ever happen. He's had a lot of experience as an expert witness but I thought he might be wrong. I was a little worried when this was echoed by a lawyer friend who actually laughed and said no lawyer in their right mind would put me on a jury. Now that one annoyed me a bit, but I stayed hopeful. I'm an optimist, people.

I reported for jury duty on a Monday morning, and arrived to find the parking lot at the Fort McMurray court house full. Not only was it full, so was every parking spot anywhere close to it. Apparently when they call 80 people to report for jury duty and 80 cars show up they have nowhere to put them. I was a bit disgruntled at having to park at the mall and walk over, especially since I was now running late and rather didn't want to be in contempt of court for being tardy (when I said I'm fascinated by the legal process I didn't mean I want to appear as a defendant).

So, I parked at the mall and raced over only to face the dreaded security scanner. You see, I'm one of those people you never want to travel through airports with. I come loaded with jewelry, zippers, underwires, and enough metal to make metal detectors scream and lines slow down to potential-terrorist level. Last time I went through the Vancouver airport I forgot to remove my jewelry and ended up with a nice irradiating body scan (look, given the choice of a touchy-feely pat-down from a stranger and a little radiation I'm taking the radiation). I looked at the security scanner at the court house and sighed. Amazingly enough, though, I made it through without sending the alarms into fits (and without a pat-down, too).

Off to the second floor, and to report. I handed in my form and waited, and then we were ushered into the courtroom. It was a standing room only crowd, which made watching the very old video explaining jury selection a bit more of a challenge to endure.

They did roll call, something I haven't done since elementary school, and just as in elementary school when they called someone's name and there was no reply a collective "oooooo, they are in trouble" feeling went through the crowd. This was confirmed when the judge told the court sheriff to contact those who had not shown up, find out why, and then determine if they were in contravention of the law requiring their presence (which can actually lead to charges). Gulp. I was feeling pretty damn glad I'd found that parking spot now, people.

As the video explained there is a large pool called for jury duty. This is then winnowed down lottery style, where they call your name and you stand at the front of the courtroom in groups of eight. Then they call you by name again, and you stand in front of the judge, the prosecutor, and the defense lawyer. And this is where it gets real interesting, people. 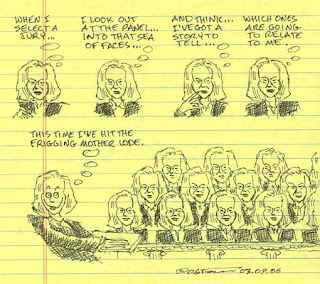 You see, all they have is your name, your occupation, and what you look like. The lawyers in the case can accept you and place you on the jury, or they can "challenge" you. They don't have to give any reason for the challenge, but once you are challenged that's it - you're not going in the jury box, and it's game over for you. You can show up for jury duty and never have your name drawn in the lottery, which means you sit there until they select all the jurors (usually twelve plus two alternates). Or, like me, you can find your name has been selected, and you go up in front of the lawyers.

Some of the people who are called then tell the sheriff that there are reasons they cannot serve - language barriers, for instance. Typically they are excused from duty, but it has to be a good reason, not just "I don't wanna". But if there are no good reasons, and if your name has been called - you are going in front of the judge and the lawyers.

After they have called a group of eight they then call you again, but as an individual. You then stand right in front of the judge and the lawyers. Now this was to me the most disquieting bit - I felt a lot like a cow at auction. I mean, how are they determining who they want on their jury? What is the criteria? I had watched them accept and challenge other potential jurors, and it's a speedy process. A quick look at the juror, their occupation, and they were either in, or out. When my name was called I went and stood in front, and waited.

The Crown, or prosecutor, looked at me and said "Content" - meaning he was okay with me as a juror. The defense lawyer, however, looked at me, then at my occupation on his sheet, and said "Challenge" - and that was it. My career as a juror was over. I was shown the door and quietly booted into the street, dreams of jury duty dashed.

Afterwards it all made sense. My RCMP friend said he knew the Crown would love me and that the defense would never want me on a jury. I'm a woman, I'm a writer, and it was a trial involving an alleged assault with a female victim. My status as a woman and a writer made me a liability for the defense and honestly I can't argue with that. The defense lawyer quite likely made a very good call, although I like to believe I can be unbiased and go totally with the facts over my own general beliefs and thoughts on things. I don't deny my disappointment - I truly would have loved to serve on a jury and see what that experience is like (hell, I would have fought to be the foreperson, I like being in charge!). But at least I got to experience jury selection, which is a process many people never will. It's a fundamental part of our legal system, and while many people shy away from the idea of serving on a jury I think it's amazing that we can. We can not only see the legal process but participate in it, and we can be a part of our community in yet another aspect.

Well, okay, maybe you can be part of our community in that aspect. Apparently I'm not jury material, and I'm doubting I'll ever get summoned again since it seems to happen so rarely. I'm still pretty pleased to have had the chance to experience it at all, though. Well, except for that whole security scanner thing. I'm still afraid of those. And if you get called for jury duty, people? Well, go early if you want a good parking spot. And remember to show up - because those judges, they play hardball, and in this instance you kinda want to remain on the non-defendant side of the courtroom!