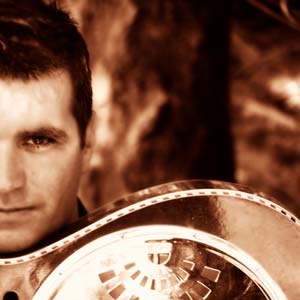 Photo credit to Joel Fafard
I suppose what amazes the most about this community is not just the variety of entertainment options available, but the unique quality of some of those options. Sunday night I was privileged to enjoy a very special evening, and it was quite unlike any other I've had in this city in the decade I have lived here. You see, last night I attended a concert - in a house.

Okay, I admit I've seen bands in a house before, but mostly because I spent most of my young adult years dating a musician, and thus I've attended more band practices than any person who cannot play an instrument ever should. However, the house concert concept has always intrigued me - it's you, a few other people, someone's home, and a musician. There is an intimacy and immediacy there that cannot be found in any other venue, and when I received an invitation to a local house concert I knew I had to attend.

The home I went to is owned by Matt and Aileen (and their lovely dog Harley, although I suspect he thinks he's the true owner). Matt sent me an invitation to a concert a few months ago but I was unable to attend due to other commitments. This time, though, when the invitation arrived I checked my calendar and was delighted to see I was free. I quickly accepted and then asked about the artist. The musician's name is Joel Fafard, which rang a bell with me. I sent Matt a message and asked if he knew where Joel was from originally, and Matt replied "oh, he grew up in Saskatchewan, his dad is a famous sculptor" - and all I could do was laugh. You see, many years ago, when I was about 19, I went to parties at Joe Fafard's place - Joel's dad. It was just one of those little coincidences that make you almost feel like something was predestined. I was meant to attend Joel's show here, I think.

Matt and Aileen bring in artists through Home Routes, which is an organization that helps people arrange house concerts. The whole idea of house concerts is to bring musicians into an intimate setting to perform, and in places where they otherwise may not find a venue. It's also a wonderful alternative for artists who are not really the "mainstream" types, those who play music that is more eclectic or unusual. And it's an amazing way to bring these musicians to places like Fort McMurray.

The concert Sunday night is tough to describe, people, and I wish you could have all been there with me. It had been a long weekend, the kind I refer to as a "marathon" - between personal social events, some writing projects, and work for this blog I was running pretty close to empty. I was feeling rather destitute of spirit, to be honest, but that began to change the moment that Matt and Aileen warmly welcomed me to their home (and Harley helped too, as I think he noted my fondness for dogs quite quickly). There was time before the concert to meet new people and chat - and then it was into the living room and onto a comfy sofa to see the show.

There were about 20 people in total, all people that Matt and Aileen know (with the exception of me, a stray they kindly invited in out of the musical cold). Every person had paid $40 to see the musician, a very reasonable amount considering the distance these performers travel to play for us. Spread around the living room was the audience, a diverse group in terms of age and occupation. When Joel Fafard came into the room to play I expected it would be a lovely experience. I didn't expect it would soothe all the frayed nerve ends that my weekend had exposed, but it did.

Joel is an amazingly talented and gifted guitarist, his fingers flying over the guitar frets as he played instrumental pieces of depth and complexity. I would close my eyes and just let the music wash over me. He isn't just a talented guitarist, though, he also happens to possess the most beautiful voice, rich and deep. He sang many songs, some of his own creation and some covers. When he sang "Long Black Veil", a long-time favourite of mine, I almost cried a bit at the beauty of his voice and the song itself.

Between songs he would tell stories, and he's a natural raconteur, too. He told of us of his son's adventures in sailing and piracy, and of road trips gone wrong. And then, he began a story about a friend of his, a friend who lived in this obscure little place called Red Lake, Ontario...and I almost stopped breathing. You see, prior to moving to Fort Mac Red Lake was my home. I lived there for five years. It's where I bought my first house - and, more importantly, my daughter, the Intrepid Junior Blogger, was born in the Red Lake hospital some 12 years ago. At that moment the predestined nature of this all was clear. The ties were just too strong, too much coincidence. This evening was meant to be, to calm me down after a hectic weekend, and to reconnect me with my past, it seemed.

During intermission I told Joel of the coincidences, and he laughed. He is a very nice man, soft-spoken and humble about what he does (isn't it amazing how sometimes the most impressive people are the most humble, too?). The remainder of the show was equally lovely, with Joel's fabulous instrumentals and beautiful vocals. By the end of the evening the stress of the weekend had melted away.

I stopped to thank Matt and Aileen for inviting me, and then ventured out into the cold dark night. I headed straight home, into my house, and to iTunes to purchase some of Joel's music (I don't waste any time, people). I looked up Vincent Black Lightning motor bikes (long story, that) and I thought about what an amazing place this community is.  Sure, lots of other communities have live music, but this was different than music in a bar. It was intimate, immediate, and direct. It was connecting with an artist, and his audience. It was more than that, too. It was people like Matt and Aileen who come to Fort Mac, have a passion (in their case music), and who take that passion and turn it into something wonderful. They turn it into something that not just they can enjoy, but their friends too - and the occasional stray blogger. They take the potential and opportunity in this community, match it with their passion and vision, and come up with an incredible event like a house concert that soothed a heart and mind desperately in need of such comfort(mine, in case you're wondering).

My sincere thanks to Matt and Aileen
for the kind invitation to join them
for the evening! You can find
Matt on Twitter as @FortMattMurray
and Aileen as @itsmtwit.
at December 07, 2011