When I got the notice that the water main replacement on my street would occur this fall and not next year as I had originally been told I was not particularly pleased. However, the rapid pace of the project this year meant the municipality could move forward more quickly than anticipated, and so I accepted that I would be using a temporary water supply (consisting of a hose leading up to my house) and being unable to access my driveway and street for about 3 weeks. It was inconvenient, of course, particularly given the zoo that requires a large amount of heavy things like kitty litter and dog food, but I stocked up and hunkered down, recognizing the only real inconvenience would be parking.


Unable to access my own driveway, which as of yesterday is now home to several tons of gravel and dirt, I have been using street parking in my neighbourhood. While the municipality provided a parking lot for displaced residents it is: a) as far away from my house as is physically possible and still be in the same neighbourhood, b) directly beside the forest belt, c) unlit, d) usually full at the late hour I arrive home, and e) not very comfortable feeling for a woman who travels solo. As I did not feel safe using this lot I have been parking on the streets in my neighbourhood, closer to my home and where the lighting is better. And I have been studiously following the street parking rules – not leaving my car too long in one location, leaving ample clearance for driveways, parking the requisite number of feet away from corners and stop signs.
Twice in the past five days I have parked in front of the same house, ensuring I left good clearance for their driveway. This morning when I went to collect my car (a two block walk from my own driveway, a bit inconvenient but pleasant enough on a brisk fall morning) I found this note – and it made me so very sad for our community: 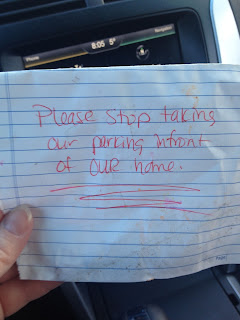 I will share the note I penned in return and left in their mailbox at the end of this post, but I really want to talk about neighbourhoods here, and why they just aren’t the same as they used to be.
I have had this discussion a lot – about why neighbourhoods don’t feel like they did when we were growing up, how we have lost some of that connection and cohesiveness. But the trouble isn’t with our neighbourhoods. The trouble is with us.


Somewhere along the way we began to stop thinking about our neighbours. We started thinking a lot more about ourselves – our needs, our wants, our homes, our parking. We stopped thinking about what our neighbours might need or want, what challenges they were facing and how we could help them. Instead we began to think about how our neighbours got in the way of what we want, like the parking in front of our house (even when it is a public street and does not belong to any of us).
When I was young I used to watch my father as every summer weekend he would mow our front lawn – and then roll that damn lawn mower up and down the street mowing every single lawn that needed mowing. In the winter out would come the snow blower and there he was again, that crazy old man o’mine clearing the snow from every driveway. It took him HOURS and I thought he was completely nuts as only rarely did the neighbours return the favour. He did it for decades, too, right into his 70’s – and right up until the lung cancer that eventually stole his life took away all his energy for lawn mowing and snow blowing and, well, pretty much everything else. But as my father lay in the hospital bed we had installed in my parents’ living room he would watch as neighbour after neighbour would come over to mow his lawn and clear his driveway of snow, meaning my mother, in her late 70’s by then too, did not have to do anything but be there with my dad as he was dying.


That’s around when I realized maybe my old man wasn’t crazy at all.
You see it isn’t our neighbourhoods that create the environment we all want to raise our kids in and live in and enjoy our lives in. It’s us. It’s how we treat each other. It’s understanding that maybe it is inconvenient to have someone parked in front of our house, but maybe it’s because they have been displaced from their own, or they are visiting from out of town, or myriad other reasons. It’s learning to take the small frustrations and inconveniences and brush them off our shoulders, knowing that at the end of the day what matters more is that we can either build a great neighbourhood by being a great neighbour, or we can contribute to it becoming the kind of place where even we don’t want to live.


My father was, in all actuality, a very smart man. And a damn good neighbour, too.
I sat in my car for a few moments this morning, and then I wrote this response and dropped it into their mailbox. Should they happen to be reading this, the offer at the end is genuine. You see, I am my father’s daughter in the end.


Thank you for the lovely note. Unfortunately due to water main construction I cannot park in front of MY home, forcing me to seek alternatives, including parking on a public street.
I’ve taken a photo of your note. As a local writer I am exploring the theme of the demise of neighbourhoods and the concept of community, and your note will serve as a great illustrative example.


The public street is not yours. Any further notes left on my vehicle will be given to bylaw.
Incidentally should you wish to park in front of my house when the road construction reaches your area call me at XXX-XXX-XXXX. I will gladly allow you to park in my driveway. It’s what good neighbours do.