I was tremendously excited to hear of your recent visit to Fort McMurray. My daughter, usually referred to in this blog as the Intrepid Junior Blogger or IJB, has been a fan of yours for years – over a decade, actually, as she is on the cusp of turning sixteen and she has been watching your “science guy” antics for as long as either of us remember.
I was under no illusions about your visit, Bill. I know you are concerned about climate change, and to be very frank so am I as I recognize it is real and occurring and a reason for concern. The IJB, your fan and a science-minded young woman, is also deeply concerned about climate change. In fact she plans to study engineering physics in the future with a goal to work on developing sustainable technology for space exploration, technology that will no doubt have applications right here on our planet, too. I credit you for a great deal of her interest in that field of study and for her ambitions, but there is something else to which I attribute her future plans, Bill: the oil sands.


You see the IJB has grown up here, in an amazing community that has at it's centre the oil sands industry. Perhaps more than most she has come to recognize the world’s reliance on oil as she has lived in the epicentre of the oil industry for virtually her entire life. When you commented on how depressing the sight of the oil sands sites is we weren’t surprised, as industry – any industry, Bill, not just oil production – is not pretty. The IJB was born in a gold mining town and she knows the tales of decades-old tailings piles filled with toxic metals, the sight of strip mines and the aftermath of industrial processes. But she knows something else, too. She knows we have yet to find a reasonable alternative to oil.
Bill, you toured the oil sands by helicopter, and I suspect you traveled to our community by plane or car, vehicles using oil. You have worked for years in an industry touched by our resource, as our entertainment industry is fuelled by oil, and oil touches most of the aspects of a production. The IJB, through a life spent in an oil town surrounded by an oil-dependent world, has come to recognize that we do need to find a sustainable alternative to a limited resource, and she intends to be one of the people who work on finding it.


I am not going to decry your visit here, or your comments. I wish you had spent some time with the people of our community to better understand that we are not deaf to the concerns of climate change, and to discover that many of us would consider ourselves environmentalists. We are just pragmatic about it, recognizing that until a viable alternative is found that we must do our very best to be responsible stewards of the one we have: oil.  One of the quotes I found attributed to you is: "everyone you will ever meet knows something you don't". We know a few things about oil sands, Bill, that you probably don't. Maybe you should ask us sometime. I think it would the beginning of a great dialogue on our shared future on this planet.
Thanks for coming, Bill. And thanks for inspiring the IJB to pursue a career in science – not on television or as a celebrity, but as someone who hopes to one day work on the key energy technologies and developments that may change our world. I hope you will keep in mind that Fort McMurray is more than oil, and that the people of our region are just as passionate about our home, our people, our planet and our future as you are. That future rests with people like my daughter, who come to the table with a profound understanding of the impact of oil because it has always been part of her life. She knows the world needs it now, but she also knows eventually we must find an alternative because oil is a finite resource, and one day it will be gone. She is fuelled by her desire to make a difference in the world, her belief in her ability to do so and her solid childhood spent in Fort McMurray, Alberta, a place that knows more about oil than almost anywhere on the planet. I think she is well placed to truly make that difference - and it is thanks to people like you, and to the oil sands. I am deeply grateful for both. 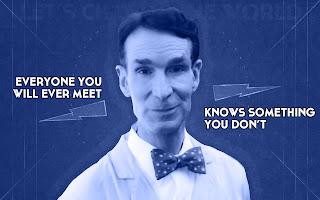