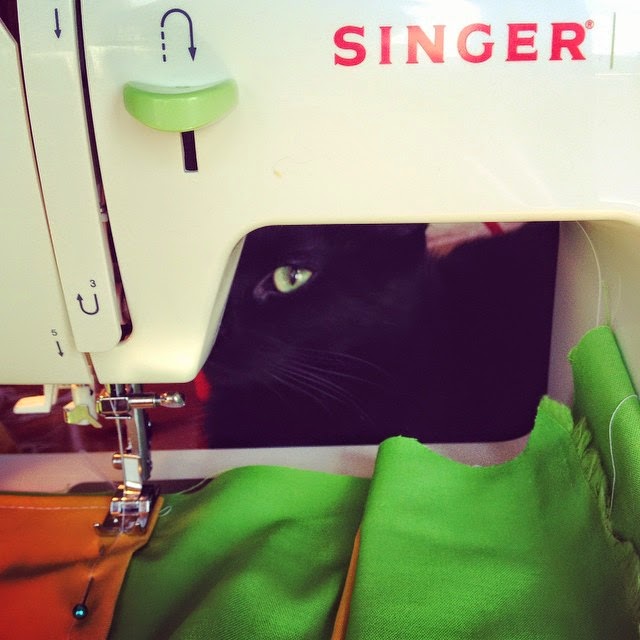 The whirring noise is a bit disconcerting for the pets, to be honest. Unlike the vacuum cleaner, to which they have become accustomed but continue to despise, this machine is new to them as it is not hauled out of the closet very often. In fact when I posted a photo on Facebook of Sirius Black Cat “helping” me I got an immediate text message from a friend exclaiming: “I had no idea you know how to sew!”


I must admit I was perplexed. Isn’t sewing something everyone knows how to do, an instinct as strong as riding a bike and your mind never really forgetting how to sew around a corner and what a selvage is? Isn’t threading a sewing machine one of those things we all know how to do, ingrained somewhere in our heads? But I was wrong as friend after friend revealed they have no idea how to sew, a skill they never learned and regard with a certain degree of awe, as if those who can sew are performing some kind of alchemy.
And I suppose it is alchemy of a sort, turning strips of fabric into clothing or quilts. This past weekend I spent some quality time with my sewing machine (actually two of them, as midway through the old machine began to make unhappy noises until the bobbin cover popped over and the machine flung the bobbin across the room as it whirred its final whirr, requiring a trip to Wal-Mart for a new machine). I was making the Intrepid Junior Blogger’s cosplay outfits for Comic Con in Calgary, and the sewing machine was needed to accomplish a task that seemed a bit monumental for a bit as I feared I would not remember how to sew as it has been so long.


Sewing, though, is not something you forget. The rhythm developed quickly, my hands remembering what my head did not and quickly the cosplay began to come together. As the IJB slept I sewed and sewed, pieces of fabric added to pieces of fabric. As it goes with sewing there were occasional misadventures and the seam ripper was employed, and before I knew it I was almost enjoying it, the entire thing taking me back decades ago to when my mother taught me to sew.
I have often said I am the daughter of a farmer, but I am also the daughter of a farmer’s wife. My parents had lived through the Depression years and as such were frugal people, able to employ a variety of skills. My father could fix any machine, and my mother could grow any vegetable. And oddly they both knew how to sew, my father on a large industrial sewing machine he used to create covers for furniture and seat cushions, my mother on her old Singer machine she used to create clothing and tablecloths.


I will never forget her patiently teaching me to sew, the hours I would spend on that machine making a dress or a skirt or a blouse. Some turned out great, and some immediately headed to the “recycle for a new project” pile as they turned out so poorly – but what I never fully understood was what a gift she had given me, because I know how to sew, a skill that not everyone possesses it seems.
When I had most of the cosplay together I called the IJB upstairs from her basement lair and had her try it on, worried that she would be unhappy with the result. Instead she fixed me with a beaming smile and said “It turned out better than I thought it would, it’s great”, and I admit I almost burst into tears of relief, my hours at the machine having apparently been well spent.


As I sat at the machine again this week and listened to the soft whirring I stopped and called her upstairs again. She came and when she looked at me quizzically I asked her if she would like me to pick up a simple pattern and some fabric and teach her how to sew, and her eager affirmative reply made me feel almost indescribable.
There are a few things we pass on to our kids, like the colour of our eyes and hair. Sometimes we pass on our political leanings. And sometimes we have the opportunity to pass on a gift that was given to us long ago from our parents, like the ability to cook, or fix things, or sew. This year I will pass that gift on to her, a gift that goes far, far back in my family history. I will teach her a new skill, one that not everyone knows, and all I can think is the saying: “and sew it goes.”