When this blog first began someone referred to my output of posts as “formidable”. They found it astonishing that I could blog almost every single day, only rarely missing one during the years when it really found traction. I could, as they say, “crank them out”, but in the last two years while the blog has remained active the number of posts has dropped a bit. Initially I was worried the decline in posts would have a detrimental effect, but the interesting thing is I have learned the exact opposite is true.


Now that I post a blog three or four times a week I find my readership for each post has actually gone up, not down, and I continue to attract new readers. I suppose I understand this to some degree as now that my days are filled with writing, reading and editing (it is quite literally what I do, professionally and personally, for 10-12 hours every single day) I don’t have time to read the blogs of those who post daily, and I often find it far too overwhelming to even check in on them. I find myself reading those who blog weekly far more, never feeling the guilt of having missed a day or skipped a post. I can easily catch up on those on a slow Sunday morning, one of the rare times I now have for reading for pleasure.
Recently I was discussing with some friends a subject we needed to broach with some others. When it came time to determine who would speak to the group they elected me, but not because I am one of those who talks a lot in such gatherings. I am instead more of an observer, speaking rarely, but it was because of this trait they felt I was the one who would be listened to – because I used less words, which meant the times I did speak had more meaning and impact. This was one of those “aha” moments for me, an enlightenment that speaking less can actually mean more.


A long time ago, as a child, my nickname was “Chatty Cathy” as I spoke nonstop, chattering on incessantly and likely mostly nonsense. As I grew older, though, I found I was speaking less and listening more, and this has never been truer than in the last few years when I took on new challenges and opportunities. It was both an organic and a directed transition as I began to realize how important it was to my newfound role as a writer to observe more than speak, and to write judiciously as the pen (and the keyboard) is a powerful sword.
This last week I had the opportunity to participate in a workshop designed to help some local individuals understand the role of media and how to transmit their message to the world. As someone who straddles both worlds – communications professional and new media – I find the entire process intriguing, and I am never happier than when I can help others understand concepts like key messages and strategies to build their confidence when speaking to media or publicly. I watched the faces of the participants as they began to understand the dance between themselves and media, and began to realize the power of a few key words to carry their message.


I write so very much now, but I am not a writer. Writing is instead who I am, as fundamental to my life as breathing. On days when I do not write something – even just an email – I find myself feeling empty and as if I have wasted precious time I will never regain. I find myself reaching more often now  for new stories, ones not right for this blog, and wondering if I should resurrect my personal blog, one left derelict for so long it feels like it belongs to another person. I find myself writing snippets for the book I hope to one day publish, stories of a faltering marriage, losing the life you had only to find yourself and a memoir of my life in this place that can likely only be published some day when I have moved on and to a new place. I write dark poetry that comes from a hidden place I am only beginning to discover, and I write, write, write.
But in this blog I write a bit less, fewer words but I hope with more meaning. I choose my topics carefully now, never feeling compelled to fill space and no longer worrying that people will think I have given up on the blog or stopped writing. I continue to write, but I write other words and in other places, some that people see every day, some they will see in time and some they will never see because they are private and intimate and just for the pure joy of writing them.


Less words, more meaning. It has become a mantra of sorts, of using these precious minutes and hours and days of my life to produce words of quality, not quantity. It has in some ways been incredibly freeing, because I am now unafraid to not only write but to not write on occasion, to simply observe and be in the moment. Sometimes life simply has more meaning when fewer words are said or written – except on days like today when my thoughts and musings wander to writing and words and meaning, and I find myself writing about the interconnectedness of it all. 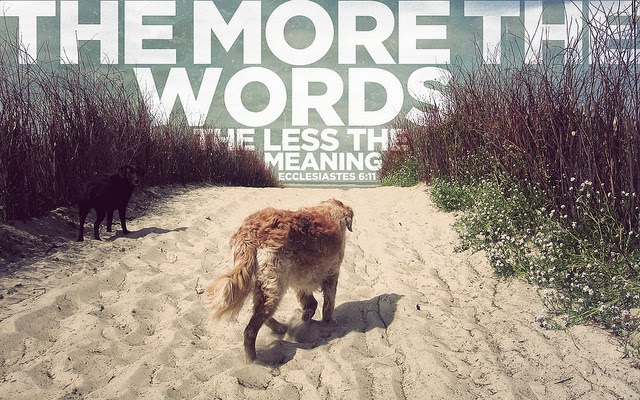