Just before the holiday season began I received an email from someone who reads both this blog and the column I have the privilege to write in Fort McMurray Connect. They were very kind about my work, but they had one question: why didn’t I write more about being a single parent?


They too are a single parent, and explained to me that they feel it can be a somewhat lonely existence in this community, as the nuclear family is alive and well here. As they pointed out there is nothing wrong with that, but they found few people talked or wrote much about single parenting in Fort McMurray. They wished someone was writing about single parenting in this community when you are here without family or a partner, the challenges and the triumphs – and the occasional loneliness. And they asked why I only touched on the topic lightly.
It is indeed a fair question. No matter what else I am – a writer, an employee, a colleague, a community advocate – I am first and foremost the parent of a teenage daughter, and yes, I am single. My daughter’s father lives in Calgary and, while she spends a good deal of time with him, for the most part I parent alone on a day-to-day basis, although for most of her young years we did so together. And there are challenges to single parenting, from finding enough time to do laundry to ensuring we spend quality time together. I suppose I have only touched on the topic lightly in the past for a few reasons, but perhaps mostly because it was one I was not yet ready to tackle.


Now, though, as a new year begins I have decided to delve a bit more deeply into single parenting, thanks to the prompting of my kind reader who suggested that perhaps my writing could make her, and others like her, feel not quite so lonely in their adventure in parenting solo. And this seemed like a good time to start, too, since this Christmas was the first one since my daughter was born fifteen years ago that she did not spend with me.
When my husband and I separated one of the things we decided was to divide up holidays. On the first Christmas after our separation the Intrepid Junior Blogger chose to spend it in the new home we have established together along with the inhabitants of the Triple M Zoo – but this year was the year she was headed off to her father’s, flying to Calgary as she has now done so many times.


Early in December we discussed whether we should celebrate our own Christmas before or after the actual date, and we decided that since she arrived home on December 30 that we would celebrate on January 1, opening presents and making a nice meal. And then, a few days before the holidays, I saw her off at the airport.
I don’t cry when she leaves now in the way I did at first. As she has grown and changed and adapted in the most remarkable way to this new aspect of her life so have I, missing her every moment she is gone but knowing that she is enjoying the time spent with her father. She also has new relationships to build now, with a stepmother and younger stepsister, and these trips and time spent with them helps her to continue to adjust to this brave new world she inhabits.


This time when she left there were tears in my eyes, as it was my first Christmas away from the young woman who will always be my baby. As I drove home from the airport, though, I thought about how days like December 25 are so arbitrary, not set in stone but simply dates that have become traditions we adhere to.
The IJB and I spent the day of December 31 at The CRAZE, the annual family New Year’s Eve party at MacDonald Island where I happen to work. It was a normal work day for me, but for the IJB it was a day she spent as a volunteer. We came home that evening exhausted but we managed to stay up past midnight, me with a movie and a bottle of wine and her with her laptop and surrounded by cats.


On New Year’s Day I woke early and with coffee in hand watched a movie, and waited for the IJB to awaken. I spent the time watching the soft fluffy white snow falling while the indoor Christmas lights twinkled. I put her presents under the tree and kept the cats from scratching them open to reveal their contents, and I reflected on how part of single parenting is adapting to change. I had spent my own Christmas quietly, watching movies I have waited months to watch, catching up on my favourite TV series and reading. It was a different sort of Christmas, but I had enjoyed the solitude that I so rarely get to experience.
The night the IJB returned home from the holidays I learned the son of a dear friend had died very unexpectedly. As I sat there on New Year’s Day I reflected on this too, on her sorrow and pain and on my own as I felt her loss so deeply, as her friend and as a mother. I had held the IJB close when I heard the news, having never been happier to have her home and with me than I was at that moment.


The IJB finally awoke on New Year’s Day at about noon, and we opened presents. We gave the zoo their gifts, too, Sirius Black Cat so enchanted with his new cracknip (as we call catnip) mouse that he ran away with it still in its packaging and we had to hunt him down to retrieve it. And as the day wound down I hugged the IJB and said: “Happy Merry New Christmas Year!”. She looked at me, clearly puzzled but also quite used to her mother’s quirks.
“Happy Merry New Christmas Year,” I said again. “I think we just invented our own holiday – a new tradition,” – and she smiled at me, a young woman who will always be my baby, no matter how old she is.


Single parenting, dear readers, is all about being flexible. Some years it means spending Christmas Day away from your babies, whatever their age, and finding a way to develop new traditions. Single parenting is often about not dwelling on the time you are away from your kids but celebrating the time you are with them, no matter on what date it falls on the calendar. Single parenting is about celebrating Happy Merry New Christmas Year, and not only accepting it but embracing it, because our time with our children is finite and life, as I learned so painfully through my friend’s experience, is fragile and uncertain.
There is a quote of which I am very fond. It is the one that kept running through my thoughts on New Year’s Day as I waited for my daughter to wake up and begin our holiday together. I think perhaps it is my motto for this year, one that is almost certain to be the most challenging for me in both a professional and personal sense. Happy Merry New Christmas Year, everyone. I wish for you a year that takes your breath away. 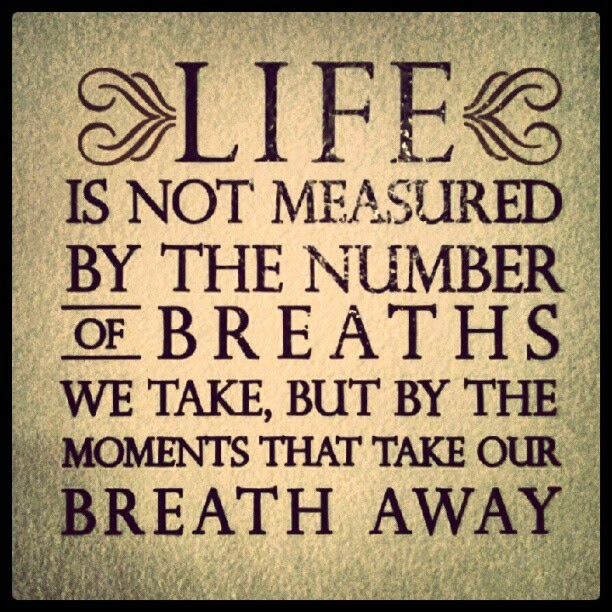