The Roller Coaster of Interesting Times 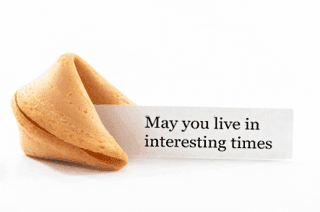 It is claimed that the phrase “may you live in interesting times” is the English translation of a Chinese curse or proverb. No evidence exists that this proverb was ever used in China, but I cannot help but think that it is perhaps the most appropriate phrase when one is considering the current Albertan landscape, both political and financial.


I don’t write in this blog often about financial issues as there are those much better informed than I who can provide intelligent commentary of falling oil prices, OPEC and the resulting impact on the economy of our country, our province and our community, but even I find myself pausing to consider things when it becomes clear that oil price instability has people deeply worries. As far distant as I am from being an economist even I watch the price of oil tumble and play out the scenarios in my head and what the potential ramifications are for a community and region heavily dependent on that resource. I cannot count the number of phone calls I have received from journalists, interest in our region renewed as the oil prices tumble.
I have lived through this before here as many of us have, watched as the oil prices dropped and varying degrees of panic developed, and I have watched our core resiliency – but there is no doubt that it has an impact, and I recall times when the community became much quieter as contract workers were laid off and local businesses felt the pinch of decreased revenues. And I have lived in a resource-dependent community before, a small gold mining town in Northwestern Ontario at a time when the price of gold could only be described as abysmal and when things seemed bleak for that industry indeed.


Resource towns are tough towns because they have to be, the kind of place where innovation and resiliency flourish because they go through the boom and bust cycles. That doesn’t mean we don’t experience some trepidation but generally speaking we are the kind who simply hang on through the bad times. As I recently said to a friend the only ones who get hurt on a roller coaster are the ones who jump off, and most of us have ridden this particular coaster before, shrieking a bit during the dips and dives but hurtling into the end of the ride quite alive.
And while our financial times are interesting indeed it is the political landscape, particularly provincially, that is even more so. I have been on the planet for a few decades and thanks to a father who took great interest in politics I have followed them for most of my life, no matter where I have found myself living. I would suggest the last year has been one of the most astonishing I have ever experienced when it comes to politics, as we are now on our third premier in just one year. The resignation of Alison Redford, the interim leadership of Dave Hancock and the successful leadership bid by Jim Prentice has made for interesting times , but the recent revelation that several members of the official opposition – including the party leader according to most reports – will cross the floor to join the PC government has most people, including me, a bit flummoxed. I have watched with great interest as Prentice stepped into the role of Premier, and while Bill 10 became a rather outrageous debacle most of the initial decisions his government made (the decision to sell the government planes that were the source of such controversy, keeping the Michener Centre open and leaving the Albertan license plate alone) were not only sound but definitely reflective of the mood of the province. This latest revelation, however, is the kind of thing I tried to explain to my politically engaged daughter but ended up throwing up my hands and saying “honestly kid I have no absolutely no idea what is going on here anymore” because it is perhaps one of the most baffling things I have ever seen. Seeing the official opposition collapse is one thing but seeing them absorbed into the government brings to mind episodes of Star Trek and the Borg (cries of “resistance is futile, Wild Rose Party, you will be assimilated” ring in my mind).


To be honest I have no idea where any of this is headed, from the economy to our political landscape. And the two do not exist in isolation as they are tied into an intricate dance, too, one affecting the other in deep ways. I find myself reading online papers a lot more than usual, following threads on the Facebook walls of friends as they theorize on the economy and/or politics and trying, in vain, to explain it all to my kid who is quite perplexed and who I fear is beginning to think this is some kind of normal. I find myself sitting back in the most bemused kind of way, too, wondering exactly where this particular roller coaster is headed and how low the dips will be – and who will be jumping off the ride.
All I know is that we currently live in interesting times, and whether that is a curse or not is truly yet to be determined.