It is no secret that I think Fort McMurray is a pretty amazing place. After thirteen years here I continue to find people and acts of kindness that astonish me and that remind me of the close nature of our community. But on occasion, too, things happen that may seem small in some regards and yet fill me with sadness and anger. Yesterday was one of those occasions. 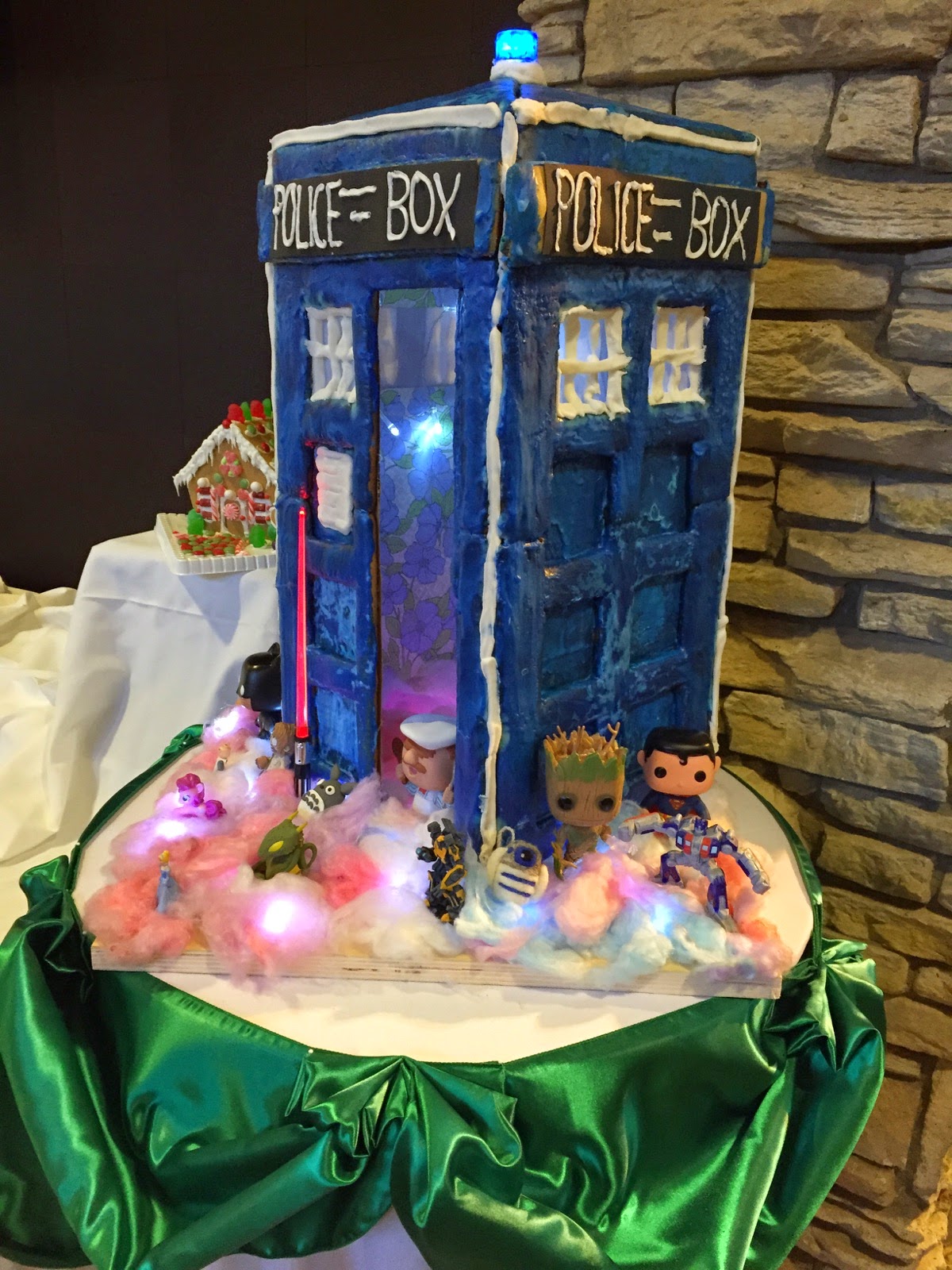 That, my friends, is a Tardis. You will likely only recognize it if you are a fan of a little British TV show called Dr. Who, one of the longest running shows in the history of television. It is undoubtedly a quirky little show, but it has millions of fans around the world who have followed the Doctor's adventures for decades. But as you notice that isn't just any Tardis, either. It's a gingerbread Tardis, made specifically for the holiday Gingerbread Village on display at the Sawridge Inn and Conference Centre, a fundraising event for the Centre of Hope.

It is an incredibly lovely idea, asking local companies to help celebrate the holidays by making gingerbread houses for display and then asking the public who enjoys them to donate to the Centre of Hope, one of the organizations in this community I am passionate about. And it didn't surprise me in the least when Nerdvana, a very new store to our community but run by people I know very well and of whom I am very fond, chose to participate by not just building a gingerbread house but by spending days crafting a gingerbread masterpiece reflective of the nature of their store and their interests, being all things collectible and pop culture. When I saw the original photos of the display I was delighted, so thrilled that Ashley, the store manager at Nerdvana, had once again outdone herself in the creative department by creating an incredible little bit of gingerbread pop culture art, complete with several rare and unusual collectible figurines owned by she and her friends. You see, I know Ashley's heart, and she is the kind of person who would spend days gluing together gingerbread, labouring over blue icing and white piping, installing lights and working until dawn to make sure every detail was perfect. She is the kind of person who gives her heart and soul to everything she does, including contributing to this community by making a gingerbread Tardis to display for a local organization I know she holds dear, too.

So you can only imagine how I felt when I received this photo yesterday: 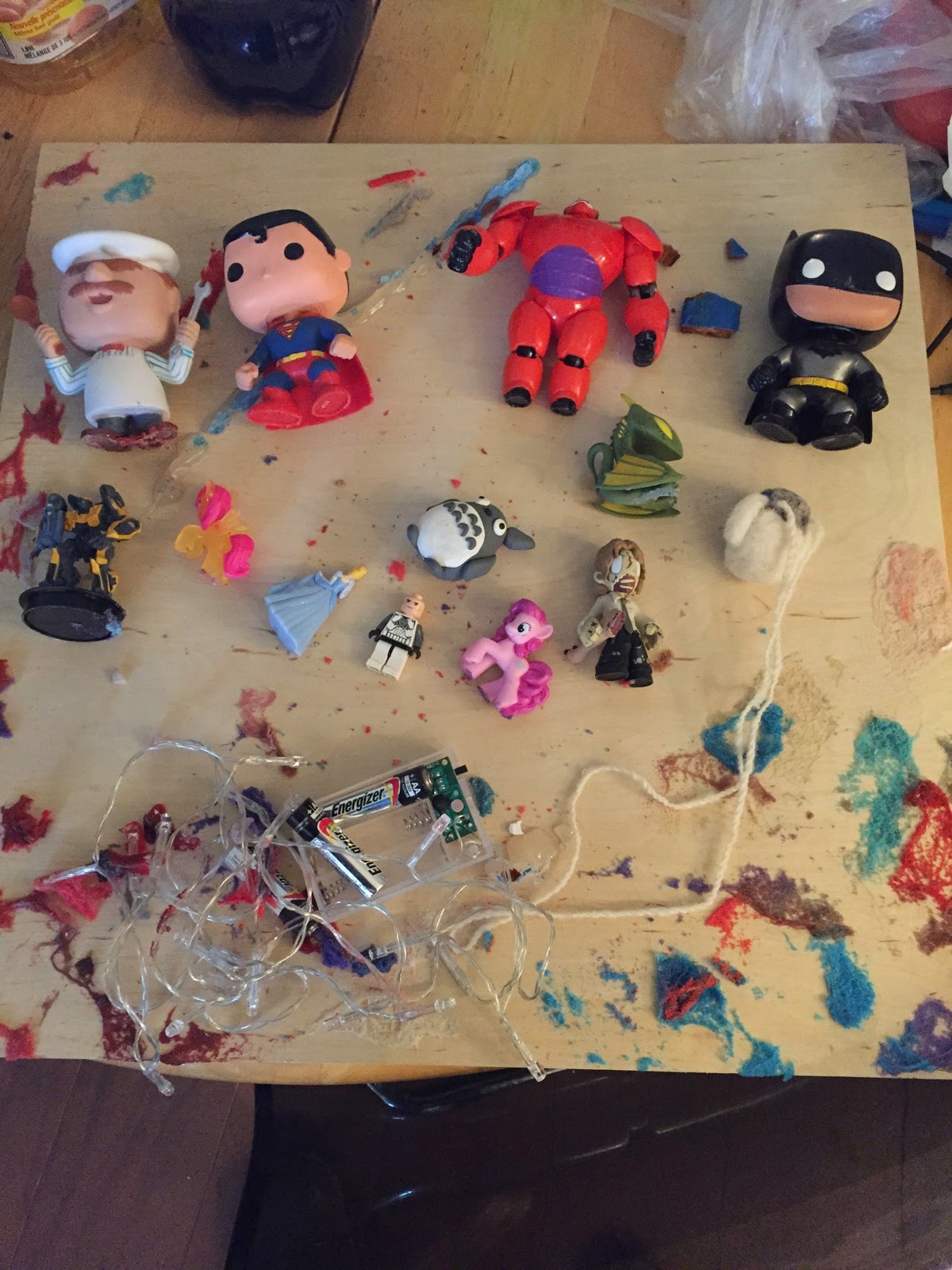 You see that is what is left of the Tardis my friend Ashley created. On the weekend, after a Christmas party at the Sawridge, someone or a group of someones saw a gingerbread Tardis and decided that looking at it wasn't enough.

No, you see, they stole it.

Yes, while in the Dr. Seuss story the Grinch might have stolen Christmas these grinches (and I have several other words for them but I will endeavour to keep this family friendly) ripped Ashley's Tardis off the base and took it, no doubt chuckling at their cleverness. With it went some of the collectible items Ashley and her friends own, some of which have great sentimental value and some of which are quite rare. That this was theft is no doubt, but it wasn't just a theft of goods. It was a theft of spirit.

I don't quite know what compels someone to steal an item such as this in a display designed to raise money for charity. I don't know what, if anything, ran through their heads, but I would suggest they are Dr Who fans as only one of those would recognize the Tardis. I would suggest they are also the kinds of people who would likely frequent a store that sells collectibles and that specializes in pop culture - you know, the kind of store like Nerdvana.

I suspect the Tardis-thieves will one day find themselves at Nerdvana, and when they do they will likely find themselves being greeted by a lovely young lady with a stunning smile and a charming accent. I wonder if they will realize that this young lady is the person they stole from and the heart they broke with an ill-considered and cruel act? Will they understand that when you steal something like this you have stolen not from a store and not from a charity alone but from a person with feelings who spent days of energy and effort on something they likely tossed in the trash after their theft?

I cannot hide it. I am beyond angry about this, devastated for Ashley and all the time she invested and for the loss of the items stolen, too. But I am angrier still at anyone who could be so heartless and thoughtless, who could be the modern equivalent of a Grinch and who likely woke up Sunday morning hung over and with their hands covered in blue frosting. Nothing can undo what has been done, but I would suggest the Grinch (or Grinches as may be) in this case may want to take stock of their actions and recognize that they owe several apologies and consider not only returning the stolen items as Ashley has requested but making a sizeable donation to the Centre of Hope to atone and hopefully stave off the "what comes around goes around" nature of the universe.

If you are reading this and are equally disappointed I would suggest you do a few things, too. If you know someone who has recently acquired a gingerbread Tardis I would ask you to suggest to them that they are not nearly as clever as they think they are, and that they may in fact be assholes instead (oops, sorry about the language there, it slipped out).

If you get a chance please go to the Gingerbread Village at the Sawridge and make a donation to the Centre of Hope or contribute to them directly here as an act of support for their efforts and to show that this act is not reflective of this community.

And do me a favour and drop by Nerdvana and if you see a smiling young lady with a lovely New Zealand accent tell her you are sorry about the Tardis and let her know that Fort McMurray is not about people who steal gingerbread displays and leave broken collectibles, and broken hearts and Christmas spirits, in their wake. Fort McMurray is better than this. Fort McMurray is about people like Ashley and Mike and the others who open little stores like Nerdvana and who even at the very beginning of their business show their community spirit and heart by contributing to a fundraising gingerbread village and who will not, and cannot, be crushed by a willful act of thievery and destruction.

And if YOU are the Grinch in this story all I can is this: in the Dr Seuss version the Grinch's heart grew three times as he realized the error of his ways. Perhaps your heart is far too small and cold to grow, and perhaps you think what you did was funny and clever and acceptable, but know this: the world has a way of dealing with Grinches, one way or another. What comes around goes around, and one day when misfortune comes around to you I want you to reflect on a stolen gingerbread Tardis and realize that you have brought it on yourself. Any fan of Dr. Who should know this lesson very well, and your blue frosting covered hands are dripping in your guilt and your shame. You are the Grinch who stole the Tardis, and frankly I won't shed a tear if the Daleks or Weeping Angels get you.
at December 16, 2014