"Mommy", said the voice from on the other side of my closed bedroom door. "Mommy," she said, her voice quivering in a way I've rarely heard it do. "I just went to feed the ferrets." A long pause and then: "Abu is dead."

And so he was, our eldest ferret and the first of the ferret trio who have been part of our zoo for some time now. Abu, who came to us through a previous owner who just wanted him to have love and attention and a home with time to care for him, was gone.

Abu was a sweet if quirky animal, as they all are really. When he first arrived we learned he would nip adults, those sharp little carnivorous teeth leaving a mark, but he never nipped the Intrepid Junior Blogger. He was a funny sort, and when we brought the first of the two ferrets who would eventually join us home he was deeply reluctant at first. He viewed the new ferret with alarm, a bouncy little thing who wanted to tussle and play, but over time they became fast friends, and when the third ferret joined them they became quite the little trio.

While we were a bit sketchy on his age we knew him to be in the older range for a ferret, and for some time I had suspected he had a tumour as ferrets often do (and the cause of death for all three ferrets I owned when I was a young adult). We knew at his age that surgery would be too much and so we decided to keep him comfortable and as long as he was eating and playing allow him to live out his remaining time happily, as he did right up until passing away in his favourite bed in the cage the trio shared. It was in many ways the best possible ending, avoiding the decision making process of putting him to sleep, the call to the vet and that final drive, a time I remember far too well from other beloved pets.

When I was young my father advised me to never trust a man who didn't like children or animals. For many years, in fact, I held people who seemed to not have the "animal gene" in disdain, but over time I found myself pitying them instead. I realized that the bond you develop with an animal is something you either get or you don't, and the love is something you either feel or you won't. Those who don't or won't have my sympathy instead of my disdain now, because it is something that escapes the description of mere words. The trouble, of course, is the breaking of that bond when an animal dies, as happens far too often as their life spans are often so much shorter than our own.

It is a pain other animal lovers know well. It is deep and sad and aching, full of memories and wistfulness for a return of days gone by. It is an understanding of a form of unconditional love that is rarely found between humans but is perhaps the hallmark of our relationship with animals.

The Intrepid Junior Blogger puts on a brave show indeed. As we wrapped Abu's tiny body in a towel and I explained that I would call the veterinary clinic about the body she shook slightly but did not cry. It was only later that evening that I found her cuddling the other two ferrets, her eyes brimming with tears. We talked then about the hard part of loving animals and about a little sable ferret who bounced into our lives several years ago and who yesterday departed very quietly, deeply loved to the end.

The Triple-M Zoo is minus one today, at least in actual numbers. But the memories will stay with us forever and we will hold the other pets just a little closer as we know that some day we will have only memories of them, too.

Rest in peace, little ferret, and thank you for being the true beginning of the zoo. You will be missed. 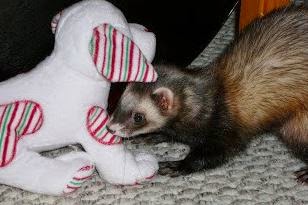