Tails from the Triple M Zoo

Perhaps the most frustrating part of my recent battles with a rare eye disease has been the inability to sit for any length of time and write. The pain and nausea associated with my medical issue and recovery complications have made for many difficult and frustrating days, including forcing me to not write at a at a particular time when there is so much to write about in our community. I have missed several events and several occasions at which I would normally have been a presence. Instead I have been sitting at home on my sofa, watching a lot of Netflix and waiting to feel better. And finally, by some grace of whatever power exists in this world (including my corneal specialist), I do to some degree.

As I pondered what to write about first I realized that one niggling detail of my life has been unshared. There has been a new addition to the family - or, as we have begun to call it, the Triple M Zoo - and he came from right here in Fort McMurray.

Before we left on our vacation this summer I dropped by the Fort McMurray SPCA. The Intrepid Junior Blogger and I had been tossing around the idea of another cat for some time, but it would have to be the right cat. After all, how many cats can tolerate a house of one dog, one other cat, three ferrets, a hedgehog and two rather busy hoo-mans? I decided on a solo visit to the SPCA to scout out prospects, and on the branch of one cat tree I found a large lump of white and orange soft fur. The lump was purring loudly, despite there not being anyone around, and when I stretched out a hand a lovely large cat basically poured himself into it, looking deeply and lovingly into my eyes as the purring got louder. His name? Fitzsimmons. 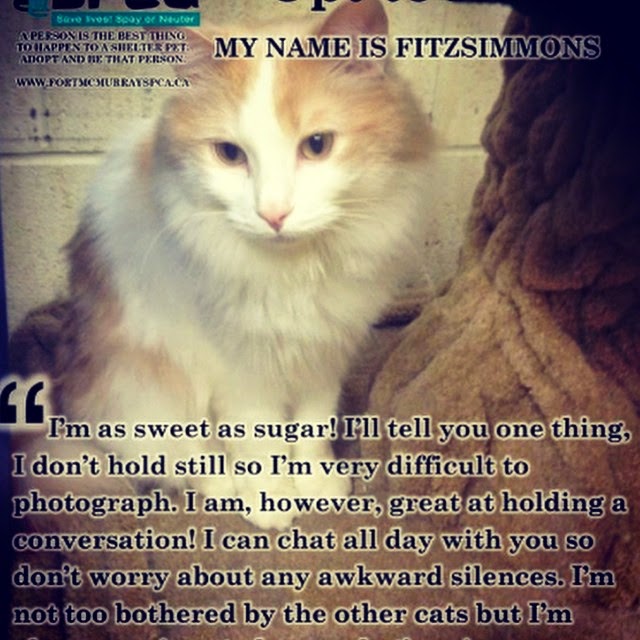 Now, I didn't want to get the IJB's hopes up, so I didn't tell her about my discovery right away. I knew we couldn't adopt him before our holiday as we needed to be home for some time after his arrival to help him acclimatize, and I figured this little gem of a cat would be long gone before our return. One night on the cruise, though, I spilled the beans, and just days after our return home we found ourselves back in the cat room gazing into some loving amber eyes with soft white and orange fur slowly coating us from head to toe (Fitzsimmons, as it turns out, is a prodigious shedder). 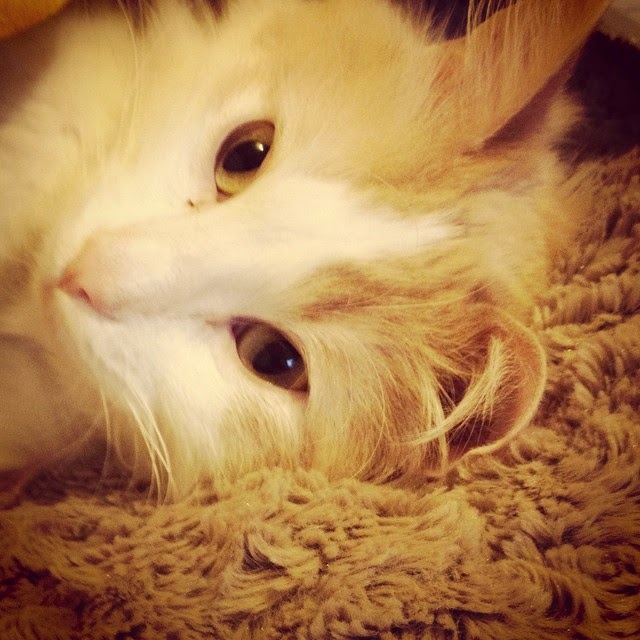 What could we do? His info said he was good with other cats and even dogs, and most animals adjust to the ferrets (eventually). The hedgehog is rarely seen as he prefers nocturnal activity and seems to have never gotten over his basic disdain for all of us, so he isn't really a factor in the dynamics. So, after a very brief discussion we filled out the papers and a couple of days later we had a loudly meowing cat headed home in a carrier.

Now, it has taken some time. At first Sirius Black, the resident cat, was completely appalled. We set the new arrival up in the laundry room to keep them separated and only allowed them supervised contact which usually ended in Sirius hissing and the new cat trying to hide. While Sirius is a ball of piss and vinegar, always ready for a rumble, the new cat was much like a large, soft, purring towel that wanted nothing more than to drape himself across you for hours at a time and smother you with affection (literally as he tends to wrap his massive white paws around your neck, all the better to stare deeply into your eyes with intense love and adoration). 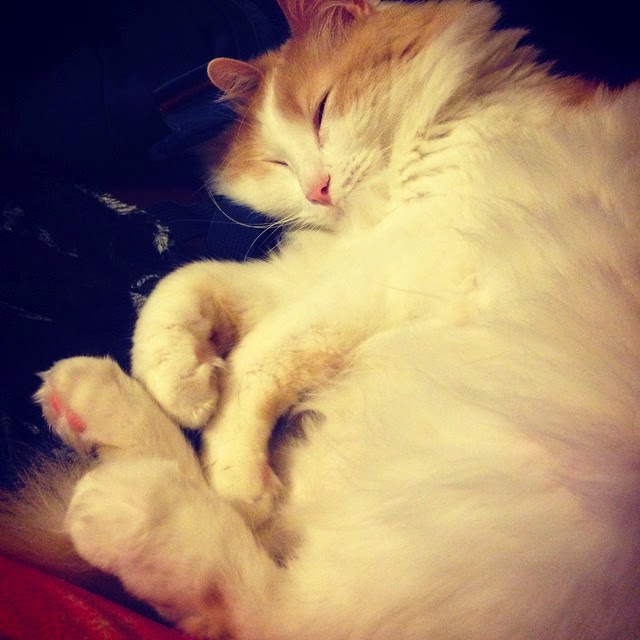 It took about 15 seconds for the IJB and the new cat to fall completely in love with each other. It took me only slightly longer, and after a few days even Sirius came around to the idea of having a "brother from another mother", someone he could pounce on and play fight (although the new cat is dubious of this pastime and spends most of his time trying to groom Sirius instead, smacking Sirius in the head when he protests and holding him down to lick his ears). They now happily share food bowls, a watering dish, and the litterbox, although the new cat has claimed the IJB as his own hoo-man while Sirius is quite intent on keeping me for himself, fixing the new cat with beady eyes when he gets too familiar with the loving. This works well for the IJB and I, as the new cat now sleeps with her and Sirius sleeps as always happily in his cat tree, keeping the house safe as he seems to be doubtful of the dog's ability to do so.

And the dog? She is keenly curious about the new arrival as she and Sirius have quite a lively friendship and she likes cats, finding them interesting. She is very tender with the new arrival, simply watching him and wagging her tail when he appears, but at this point he seems content to keep his distance and leave that inter-species relationship for Sirius to handle. The ferrets are as usual oblivious to any of this as all they want to do is play. and the hedgehog? Well, nobody can really tell what he thinks about anything, really, as his personality is so unusual we aren't even entirely sure he is completely animate or mammalian.

And so our house - the Triple M Zoo - has gone from one dog, one cat, three ferrets, one hedgehog and two hoo-mans to one dog, three ferrets, one hedgehog, two hoo-mans and two cats. It seems we have struck the perfect balance as all seem happy and content (well, again who knows what the hedgehog thinks, really). During my recent illness the IJB was away for a few days and I found myself surrounded by one dog and two cats, the dog keeping a watchful eye on me, the black as night cat cuddled at the end of the sofa on my legs and the orange and white puffball of purrs planted dead centre on my chest and staring into my one good eye. 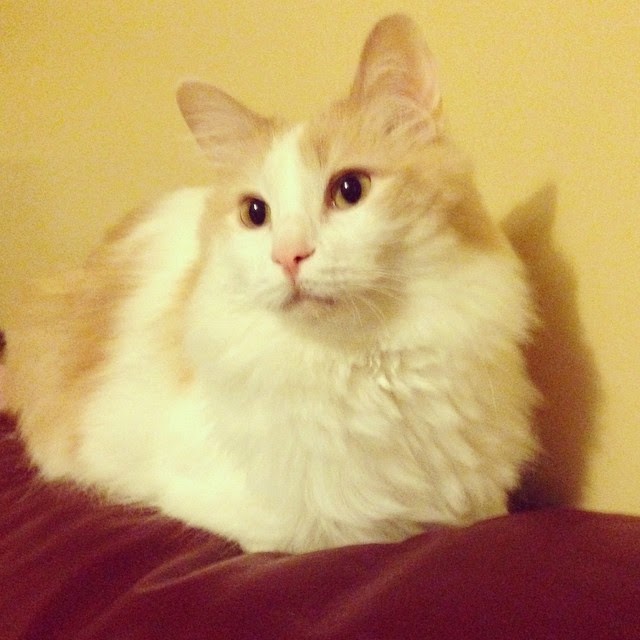 I doubt I will ever be alone again in this house, really, as it is so stuffed with animals I cannot imagine it ever happening.

There are many more tails from the zoo to share, as Sirius and the new arrival are as different in personality as they are in appearance - but for today this will suffice to introduce the new resident. Oh, and his name? Well, in a house where we don't much go for usual names it seems his name is Smaug, after Tolkien's dragon. While Smaug isn't much like his namesake I suppose he does have a rather ferocious purr which sounds much like two motorboats racing on the Snye and which I suspect could wake the dead or terrify unsuspecting hobbits. And while he may not be much like a dragon he has, most certainly, captured our hearts with his gentle ways and his sweet manner - and so today I officially welcome Smaug to the Triple M Zoo - and announced with finality that this inn is, at last, truly full. 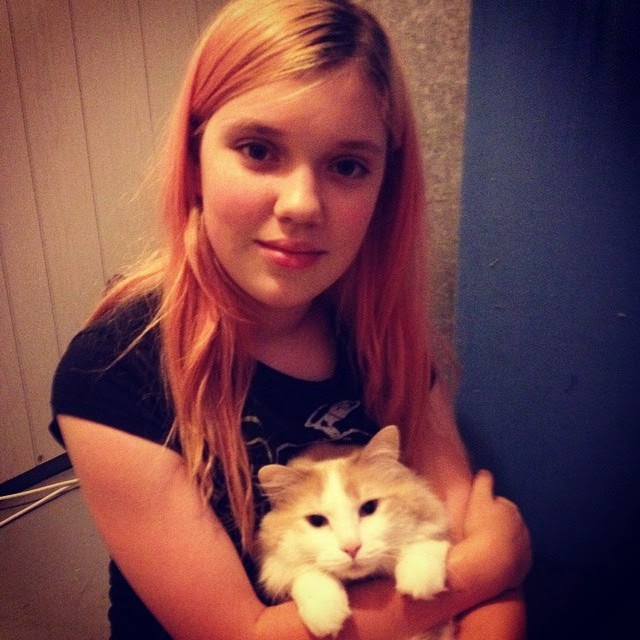