Bringing the Stolen Sisters Into the Light

I recall the conversation very well. I was researching a story on missing and murdered Aboriginal women for a local paper, and when I reached out to one of my sources they said two words I never anticipated.


Human trafficking.
I recall pausing as my mind processed it. Surely they were kidding, I thought. Human trafficking was something you saw in movies and television shows, not something that actually happened and certainly not in Canada. As gently as they could, however, my source disabused me of this belief by explaining that human trafficking is real and present and suspected to be responsible for at least some of the disappearances of Aboriginal women over the last few decades in our country.


I felt sick.
I felt sick once again when I read the story of a young Aboriginal woman found in a river in Winnipeg. The young woman was only 15, the same age my Intrepid Junior Blogger is about to turn this year, and my stomach churned at the thought of this fragile young life ended far too soon and in this horrific manner, discarded like trash.


There is something very, very wrong going on in our country. When I lived in northern Ontario I had a close friend who grew up on one of the reserves in the far north, accessible only by air or ice road. She told me of women who went missing from her reserve, never to be seen again. When the disappearances were reported to authorities, she said, they were told that perhaps these women had simply left abusive spouses or parents and chosen to not return. The concerned friends and families were served platitudes and false reassurances, and little was done to address their fears. There were no search parties, no investigations, no police reports. There was silence.
Many of those who disappeared never returned, their fates unknown, leaving behind family and friends who grieved a loss with the accompanying pain of just not knowing where they had gone or why. When my friend shared these stories she would ask if I thought such a thing would happen if a white woman in our town went missing, and we both knew the answer to that question, as we had seen the intense level of searches that took place when white women went missing across this country and continent. I didn’t know how to comfort her, because there was no comfort to be found.


Just recently our Prime Minister once again denied the need for a national inquiry into missing and murdered aboriginal women in our country. This denial indicates a total lack of concern and understanding of what these disappearances and deaths are doing in the communities across our country. Mothers, daughters, aunts, sisters – all gone without a trace, ripping apart the fragile fabric of families and destroying lives.
The time has come for a full national public inquiry into this issue, because the suffering has gone beyond the point of being tolerable. This is not an Aboriginal issue or a women’s issue – this is a human issue that touches all of us in Canada. My own lack of knowledge about the topic saddens me, just as I was saddened to learn of the existence and prevalence of human trafficking. I suspect so many Canadians are in the dark about what is happening right in our own country, and this public inquiry would not only expose the darkness to the light but if given enough power and authority could take the initial steps towards addressing the causes of these disappearances.


Here is what I know, though. Denying an inquiry is equivalent to denying the problem exists, pretending that there are not hundreds of Aboriginal women who are missing. Denying it pretends that lives are not being lost while thousands of other lives are not being destroyed. Denying it is, quite simply, not showing the leadership we need in this nation, and I am profoundly disappointed in a Prime Minister who believes denial is the right path to addressing any issue.
In this region we now have a new MP representing us in Ottawa. I would suggest this should become one of his primary issues, particularly given our strong Aboriginal communities in this region and the way this issue has touched the lives of those who reside there. This issue is not some distant topic of discussion – it is real and tangible and it is plaguing Canada, including northern Alberta.


It is time for David Yurdiga to issue a statement expressing support for the missing and murdered women of this country as well as his constituents and request that his government order a public inquiry to serve the people of this nation. To do anything else – to deny, to ignore, to look away – is to deny, ignore and look away from the tears of thousands and thousands of Canadians, and frankly our stolen sisters in this country deserve far, far better than to remain in the darkness. It is time to bring them, and the issue of missing and murdered Aboriginal women in this nation, into the light. 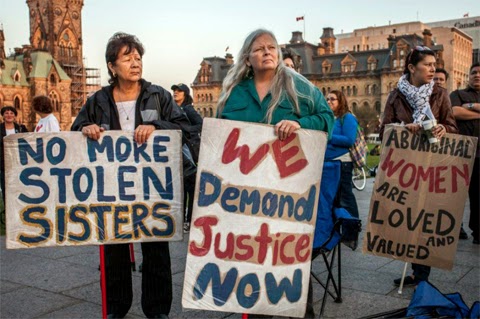