Unmasking the Real Nature of Anonymous 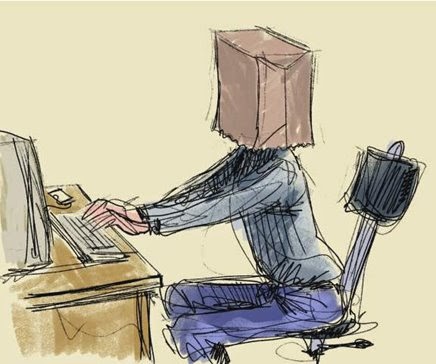 It is no secret that the anonymous commenter has been the bane of my existence for some time. The anonymous comments that have come my way in the last three years during the writing of this blog have ranged from the kind to the very unkind, but the very worst have been the ones that did not comment on my opinion or my thoughts. They focused on me as a person and my character.


I was contacted recently by an individual who has a keen interest in online interactions. A genius no doubt, with a set of skills that is used to unravel mysteries and beat challenges. One of the things they are most interested in is the ability to trace supposedly “anonymous” comments to their source, and reveal the identities of those who have left words they believe are masked in secrecy.
What they told me, in short, is that anonymity is an illusion.


There is no guarantee, they said, and it takes time. Sometimes it is successful, and often times it is not, but in this case there has been a history of successful revelations of the identity of those who have left anonymous hate-filled messages for others.
But it can be tried, they said, should I want to pursue it, and it is something they do for fun and for the challenge, and for no other reward or recompense. They said that those who are victimized by the anonymous commenter often have a burning desire to know who it is, the NAME of those who would attack us as people. They suggested, though, that perhaps this was the wrong question.


They suggested the real question one might wish to ask is: Who the hell do these people think they are?
I have on many occasions challenged an anonymous commenter. Meet me for coffee and say these things to my face. Reveal who you are. Show yourself, since you have me at a disadvantage, knowing who I am but hiding yourself in the murky shadows of the internet. It is an offer that in three years has never been accepted.

The hallmark of anonymity, you see, is cowardice, at least in this kind of anonymity which is simply used to spread hatred or do harm.


The one who offered services to unmask the anonymous may well be right. Perhaps the real question is who the hell thinks it is acceptable to attack one’s character or personhood? Who thinks this is reasonable, to call someone stupid or far worse, to leave words that they know will hurt and cause pain?
The reality is the anonymous commenter knows it is not acceptable or reasonable, because if they did they would see no reason for anonymity. They would not fear attaching their name to their words, but that they do not shows that they themselves acknowledge the very fact that their actions are, at the end of the day, indefensible.


The reality is that the anonymous commenter is quite likely not a stranger, as my new friend has suggested. They said they could possibly help me unmask them, but they cannot help me if we learn it is a family member, a friend, a colleague or a fellow writer. They said that in their experience the ones who have chosen to be anonymous do so because of their proximity to the individual, and not because they are strangers – because a total stranger has no need to be anonymous. They cautioned that we might get the answers, but that the answers may be more painful than we expected, and do even more harm.
Will I pursue this? Doubtful, as it seems to fall on the fringes of the internet, a murky world where ethics and morals seem a bit shadowy. They have offered to help in the future should I ever request it, with no guarantee of success but with a fairly strong track record of finding ways to unmask the anonymous. But first I need to come terms with the real question, you see.


Maybe the question about anonymous isn’t who they are – but who the hell they think they are. 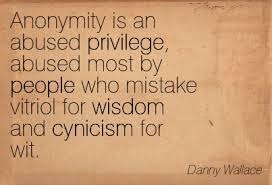