When I told her those eyes, already ridiculously huge and round, got even rounder. She let out this small squealing noise, the kind only teenaged girls can make and that rivals fingernails on a chalk board for pure grating quality.

"He is coming hereeeeeeeeee", she squealed, a bit breathlessly.

She, of course, is the Intrepid Junior Blogger. And who was eliciting this high drama, the huge green-brown eyes and the squealing? A rock star perhaps? Nope, that sort of thing doesn't do it for my kid. Her response was all about astronaut Chris Hadfield coming to Fort McMurray for the Northern Insights Speaker Series from the Fort McMurray Public Library.

Maybe my kid is unusual. Her heroes are not musicians or actors, at least not for the most part. She idolizes people like Justin Trudeau and the late Jack Layton instead, valuing their intellect and their beliefs (although she has called Trudeau "hot", and I can't really quibble on that one). Pierre Elliott Trudeau was one of my heroes, and so I understand her political nature and her tendency to idolize those in that career. But my kid is also hopelessly and desperately addicted to math and science, and so her heroes includes the ranks of those who have achieved acclaim in those fields, from Stephen Hawking to Einstein, and now including Hadfield, who made being an astronaut and a scientist accessible to the masses through his inclusive and clever use of social media while in space.

When Hadfield was in space the IJB provided me with a running chronicle of what he was up to - what he tweeted or interviews he gave or things he did. She has expressed some interest in the concept of being an astronaut, although given her inability to endure carnival rides without turning green she recognizes the zero-g environment may prove a challenge to overcome. And while she may never go into space (although I cannot entirely discount the possibility) I suspect she will pursue a career in science of some sort, perhaps engineering where she can continue to try to explain completely inexplicable things to her poor mother, who has an avid interest in biology but for whom the entire idea of physics and the other sciences induces tears.

I attended the press conference announcing Hadfield as the first speaker in 2014  from Northern Insights, and I was delighted as I knew the IJB would be thrilled. I was delighted too because the FMPL is continuing to completely blow me away with this series, having brought Malcolm Gladwell, Bill Cosby, Arlene Dickinsfield and Martha Stewart to town in 2013 alone. Starting the new year with Hadfield was a sure sign that this would be yet another stellar year in a speaker series that has quite honestly become one of my favourite events in this community, and one I would not dream of missing. And I think the IJB feels the same, as she has now attended some of these events with me and the experience has no doubt enriched her young life.

When I told her of his impending visit I pulled out of my bag Hadfield's book and gave it to her so she can read it before he speaks. She clutched it to her, eyes still open wide, "science fangirling" over the prospect of hearing her hero speak and imagining what he would say.

"Maybe you can get him to sign it," I said, gesturing to the book.

The big round eyes were suddenly matched with a round little mouth as she contemplated that prospect. After all, who needs to idolize rock stars when you can have an astronaut as a hero instead? 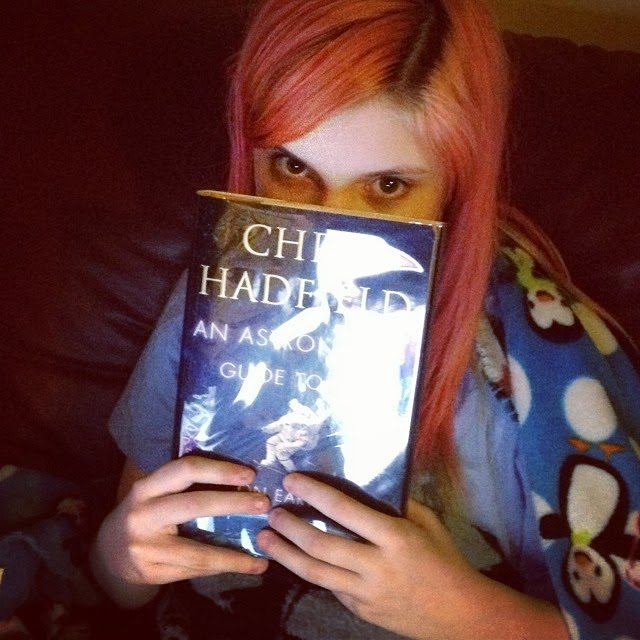