Yesterday I wrote about a little plan hatched by Canada Post to address some of their financial woes, and it involved invoking a $5 surcharge on all parcels coming into Fort McMurray. That post, and that decision, ignited a social media firestorm, and while it was intriguing to watch the response on Twitter and Facebook from local residents it was even more intriguing to see Canada Post's reaction, which was:

Yes, dozens of people tweeted at Canada Post and asked for an explanation of this surcharge, and they did not reply to a single person (especially outraging from the ironically named @canadapostcares Twitter account). Not one. Now, their spokesperson did an interview with the Fort McMurray Today, and when asked why Canada Post is instituting this surcharge his response? Well, this was it:

Caines said he found out about the surcharge after Tuesday, and explained that it reflects the fact that it’s expensive to do business in the city.

“It’s related to the cost of doing service there, for providing the service. It’s that much more costly for us to do business there,” Caines said.

When asked if the charge will improve service in Fort McMurray, Caines responded, “Service has improved exponentially in Fort McMurray, we know that for sure. All through the Christmas holidays we had great service up there, parcels were being delivered, everything was fine.”

He added that Canada Post is trying to hire more people to deal with the understaffing issue, but said the surcharge wouldn’t go towards raising salaries to keep people in their jobs at Canada Post.

Now, keep in mind this is the same spokesperson who apparently earlier this week denied any such knowledge of any such surcharge to the reporter from the Today, and who appears to be a deer in the headlights when it comes to the realities, since for months residents have been complaining about lost and delayed mail and parcels, and erratic delivery service in Fort McMurray.

I asked Canada Post - repeatedly - to advise how many parcels come into Fort McMurray on a daily basis so I could gauge what this would mean in terms of cold, hard cash into their coffers. And while they did not respond to me (or anyone else) a former local employee did. They informed me that they estimated an average of 2000 parcels come into our community daily, with approximately triple that amount at Christmas. At $5 per parcel, and considering some variances for weekends, one could estimate that Canada Post is looking at about $3 million dollars plus in new revenue - just from this surcharge.

And please note that it seems this revenue is not intended to increase salaries to improve retention, and while they are trying to hire more staff it seems this cash is not destined to bump up salaries to entice new employees. And as per the spokesperson above the common wisdom at Canada Post Corporation seems to be that all is just hunky-dory in Fort McMurray and everyone is blissfully happy with their mail delivery....except that this is not seen in the deluge of emails and messages I have been receiving.

What I have heard is dozens of complaints, and even more so comments from people who have reached out to Canada Post through Facebook and Twitter and found their comments not only ignored but in the case of Facebook even deleted and their participation blocked so they could not communicate with Canada Post further. I take a dim view of this strategy, as unless an individual is abusive to other customers then their participation on your social media should be encouraged, even if it is complaints because those complaints give you an opportunity to improve your service. If your social media is only present to pay lip service to the concept of dialogue then you are better off not having it at all, because it defeats the purpose of creating that dialogue between service provider and customer, and instead of being good public relations it becomes some of the worst.

So, what would I suggest? I would like to see a press release from Canada Post detailing a few things. Since I suspect they never planned to announce this change publicly and you were likely only going to find out about it when Nan in Newfoundland went to send your birthday parcel and got dinged an extra 5 bucks I think the time has come when they cough up some facts.


Here is what I don't want to see:

I would also suggest that given this is a Crown Corporation that they not only have an obligation but a responsibility to reply to their customers, who are taxpayers and thus stakeholders in their business. These responses are not "optional", but I would rather suggest they are mandatory, because Canada Post does not "own" us - we own them, and as such we are deserving of some answers.

I would also suggest that this is an opportunity for our local MP to regain some ground he has recently lost with his electorate. He has the right and responsibility to seek answers on our behalf, and I would very much like to see Brian Jean do so, and do so immediately. This is a federal issue, and it is time for him to step up - or step aside if he can do nothing to provide the answers we seek. What I don't want to see from him is this:

I want to make something else clear. I am not of the "pitchforks and torch" crowd, and I am not looking to burn anyone at the stake. If this decision can be proven to me through sound financial reasoning then I am quite willing to let the matter drop - but if this is a Fort McMurray cash grab, one destined to have an effect on us and those who ship to us, whether they be Nan in Newfoundland or small business in Alberta or massive online retailers, then that should be understood as well. I think it is quite reasonable to not only ask for answers, but demand them - because I am very tired of having my questions returned to sender, like undelivered mail. 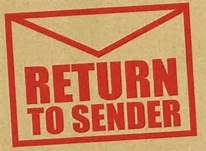