I rarely do double posts in a day, as I don't believe that readers tend to appreciate them. Today I am making an exception and doing a brief post, as I would like to suggest a response to some recent comments from Canadian musician and icon Neil Young.

One of the comments Neil made when he was in Fort McMurray was saying it looked like "Hiroshima". Now, not only is this an insult to our region but I would say it is an insult to Hiroshima as well, a place that witnessed the kind of destruction that few can imagine.

One of my biggest issues with this comment is that Neil did not differentiate between industry and community. And I will be very frank - industry is not pretty. The oil sands sites are not beautiful, but then again I was in a gold mine once, far underground where the "ugly" was hidden from view but there nonetheless. I have been in a pulp and paper mill, and an abattoir - and not a single one was pretty.

The funny thing is, though, that the communities around those places were often quite lovely. The gold mine was beneath a small town in northwestern Ontario, a place of stunning natural beauty with lakes and trees and bright northern skies. The pulp and paper mill was minutes from a forest, a deep and dark one with lush green undergrowth. And the abattoir was on the edge of the city where I grew up in Saskatchewan, mere feet from waving fields of grain, an endless horizon, and under a bright prairie sun.

Fort McMurray is more than oil sands. We are more than industry. We are, in fact, in the middle of the vast boreal forest, and today I am going to start sending a subtle message to the world using social media. I am going to tweet or post one picture a day of my Fort McMurray, and I am going to hashtag it to three words: #ymm #tarsands #myhiroshima. In the case of Facebook I may add text to that effect, and I am hoping to accomplish three things:

And as much as I avoid the use of the word "tarsands" in this case I will use it very deliberately, as those who wish to view us as Hiroshima use that word, and I want them to perhaps get a glimpse that it may not be quite what they believe it to be.

This is my first photo. Taken during the autumn years ago in Abasand, this was the view from the end of my street, just feet from my front door. This, you see, is my Hiroshima: 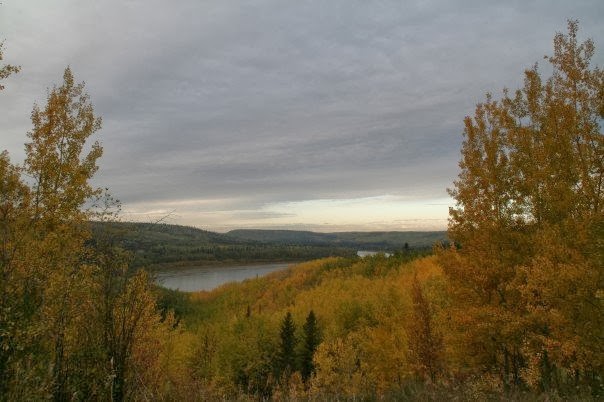