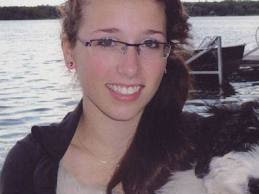 The photo above is undoubtedly familiar to you. You have probably seen it on your Facebook page, or Twitter, or on the news. And no, she is not local, and she is not my daughter. But in a way you see she belongs to all of us, because she could very well be any of our child. Her name is Rehtaeh, and at the age of 17 she took her own life.

It's a complicated story, and I won't rehash all the details except to say that young Rehtaeh was abused not once, not twice, but three times in those short 17 years on this planet. Once was when she was allegedly sexually assaulted by four young men who found her unconscious. Twice when they decided to take photos and distribute them online, something this brave new world of social media and cell phones has made so easy. Third and finally she was abused when a justice system failed her, and decided that what happened to her was not a criminal act, and declined to press charges. She was failed three times, and in the end the culmination of those failures was her death. At the age of 15, when she was assaulted, she was but 2 years older than my own daughter, and her death saddens and angers me beyond words.

And who failed her? The justice system? The RCMP? Those young men? Yes, I think they did. And so did we. We failed her, and thousands of young people like her. We have failed those who have been assaulted and who have not seen justice. We have failed those who are the victims of bullying, both online and in the real world. And I think in some sense we have failed our youth today, because I deeply fear that as adults we are so consumed in our own worlds that we have failed to remember how fragile and precious and young fifteen really is. For some strange reason we see that age as "almost an adult" and forget how the world seems such a precarious place at fifteen.

I could go on and on about this tragedy, and about what this has done to me. I look at my own daughter and think about how I would kill - and die - for her. I think about my vow to protect her from all in the world that is evil and cruel and wrong - and yet I know I cannot, and that failure brings me to my knees.

Her name was Rehtaeh Parsons. She was not my daughter, and most likely not yours. And yet somehow tonight when I sit here and gaze at her photo I feel the responsibility for her life - and her death - weighing heavily on me. She was not my daughter - and yet in sense she was, because just as it takes a village to raise a child it takes a village to fail them. And we, all of us in this global village, failed our daughter this week. That is a heavy weight to bear.
at April 12, 2013