I am a mother. I am many other things, of course, just as we all are. But if pressed to describe myself in one word I would not choose woman, or writer, or friend, or employee, or volunteer. I would describe myself first and foremost as a mother, and I see the world most often through that lens.

When my beloved daughter, the Intrepid Junior Blogger, was born my life changed. I knew it would, of course, but I did not know how profound it would be. When I was several months pregnant I ran into an elderly lady at a grocery store. She looked at my round belly and then into my eyes and said "Your life is about to change forever". I nodded and smiled, brushing it off a bit with a breezy laugh as others had often said this to me about my child's impending arrival in the world. But this lady persisted. She said, with a knowing look, "You see you think you have loved before. But this will be different. This is the kind of love you will never have known before now, and never will know again, because the love a mother has for a child is unique". Those words have stuck with me, because I am not sure anyone has ever told me anything that is more true than those words from a stranger. When my daughter finally arrived it changed my life, and it changed me. And being a mother is now my identity, and it has been for thirteen years. It colours everything I do and experience.

Last night I attended the memorial vigil for the souls lost over the decades on Highways 63 and 881. It was designed to honour their memories, and express continuing support for their families. It was meant to recognize the rescuers, first responders, and victim services workers who are impacted by these losses. It did all these things, and it was a lovely moment for our community. I was there for every moment, listening to every word - but the words that resonated the most in my own heart were those from the mothers who had lost their children.

In the last year I have had the honour and privilege to come to know two local women who lost their sons. One was lost just over a year ago in a tragic collision on Highway 63. One was lost more recently on the local ski hill, taken apparently by an undetected medical condition. To say these women have had an impact on my life would be to diminish what they have truly done. Speaking to them, hearing their stories, and having the chance to hug them has altered me in some undefinable way. Over the last year it is unlikely I have thought of anyone in this community more than these two women, because their losses touched my heart is such a deep and meaningful way that it is beyond words. Just seeing them makes my eyes fill with tears because I hurt so much for them. I do not know their pain, but I can imagine it, the depth of it, and it shakes me because I too am a mother.

Last night I also heard a letter written by another mother. It was the mother of a little girl named Faith, a girl lost on the highway one year (plus one day) ago. In her letter she spoke of losing Faith - and of losing faith. She spoke of what Faith/faith meant to her. And her words went to my very core, because it was Faith's death and my own loss of faith that started my personal journey this last year.

One thing I know as a mother, though, is that as mothers we have a tremendous amount of faith. We have faith in our children, and we have faith that the world is a good place for them. You see having a child is a complete leap of faith, because none of us can predict how it will turn out. It is taking your hopes and dreams and tossing them out into the world, and just holding onto faith. I lost faith for a bit, and I lost it when we lost a little girl with such a profound name. Over the last year, though, I found my faith again. I found faith in beauty, and in compassion, and in hope, and in life. I found faith in those who carry on despite their losses, however they happened. I found faith in two mothers who lost their sons, and who I now feel connected to in a way that defies explanation. A loss is a loss, and losing a child, no matter how it happens, is the kind of loss that no one can explain and that will never make sense. It is so easy to lose faith, I think - except that even in the darkest days I think we can find our faith in each other. 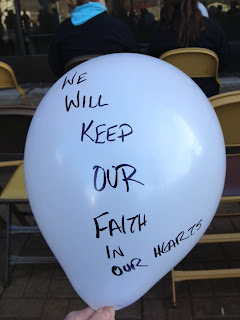 Very late last night, just as the clock was turning midnight and the anniversary of a sad day was coming to an end I drove to a place I often go in this city. It is a place where another mother's heart was broken, and where it is very likely her faith in the world was shaken when her twin sons were murdered. It is a place I go when I feel heartbroken, or when I want to think. It is a place I go when my faith has been lost, and I find it there again, because you see it is a place where the boys are memorialized by their friends and family. It is a place where faith can be seen in those who leave mementoes and messages. Last night at the memorial vigil I released a balloon with a message, and then, late at night in the driving snow, I left a small candle underneath a tree in Borealis Park. I drove away and left it lit, seeing the soft glow through a blanket of fresh snow. I left it there with my love and my compassion for all the mothers who have lost children, regardless of how they were lost. I see the world through the lens of a mother - and with a mother's faith. 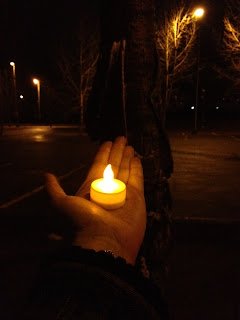