What I Learned on March 14

For a very long time, March has not been a kind month for me. Three years ago in March, one of my favourite aunts, Auntie Rose, passed away. Seven years ago - on March 14 - we buried my mother. Ten years ago on this same day my father lost his battle with cancer (oh, the irony of losing them both in the same month, just three years apart, and being back in that cemetery not only to lay flowers at his grave on the anniversary of his death but to place my mother there beside him - how that twists the knife in my heart). And then, this past week, was the almost overwhelming news that a beloved community member - and my friend - had passed away.

Perhaps it is no wonder March 14 has become a day of reflection for me. For many years it was a day of distinct and keen loss, still sharp and fresh, but over time as the pain has dulled I learned to take this day to remember not only the lessons each and every person I have lost taught me, but what I learned from losing them.

When I lost my father to his long, slow and painful battle with lung cancer perhaps the most important thing I learned was during his final days. As he lay in palliative care, his mind still sound and active even as his body was failing, I learned what matters in the last days of your life. He spoke of his children and grandchildren, brothers and sisters, friends and memories they shared. What he never spoke about was his work, not from when he was a farmer, not from when he operated a grain elevator, not from when he worked in building maintenance when we moved from the country to the city. He didn't talk of the jobs he accomplished or the ones he left unfinished. All of those fell away, because in the end? They didn't matter.

What matters in the end is those you love and those who love you, not the work you did or did not do.

Losing my mother was a very different experience. A phone call from my sister, the news of an "incident", and just a few hours later I was on a plane headed to the city I grew up in. The conversation I had had with my mother just a few days before would be our last, even though neither of us knew it. She never regained consciousness and she died in the ICU as I held her hand tightly, overwhelmed by how much I loved this woman. I didn't know our time together would be cut so short - she was in relatively good health despite her age, and I was complacent. I wish I knew then what her death taught me.

Life is fragile and uncertain. Every day might be the last, and every conversation might be the final one. Make sure you say the things you want to say, the words of love and gratitude. Never take the future for granted, because when it is too late, it is quite simply too late.

Ah, Aunt Rose. She was a true Alberta Rose. I recall admiring her as a child for her teased up, jet black hair, something I now realize was rather Priscilla Presley-esque. She might have been a rural girl, but she had an air of glamour around her too, with good taste in fashion and make up. She was opinionated and smart, too, a potent combination for someone like me to be around.

Stay true to who you are. Aunt Rose never lost the jet black hair or the interest in fashion, and she remained opinionated and vocal for her entire life. She was an Alberta Rose, with a soft and feminine exterior and a solid steel interior. It is okay to be both.

The freshest loss of course is that of Vilia Tosio, someone I came to know in this community as our paths crossed often and we forged a friendship based on mutual respect and admiration. Vilia was never afraid to be bold, to say what she believed, and to advocate for those who needed it. For Vilia those in need were the mothers and infants in our community, and the love and attention she gave to them was returned in abundance. She impacted our community, thousands of lives, and people like me, who watched her with quiet awe as she did what she did without fanfare, applause or, often, recognition.

There are many more lessons I have learned from each of these people, and in the case of my parents they are, of course, the reason I am who I am today. A friend who read one of my Facebook posts this past week sent a message saying my parents would be proud of me, and perhaps they would be - but as I sit here today I think instead of how proud I am of them, of Rose and of Vilia, and how very grateful I am to have had them in my life at all.

Loss is painful - there is no changing that reality. But it is painful because of how much the people we love mean to us, and what they have meant in our lives. I would far rather experience the pain of their loss than saving myself from it by never having known them at all. How lucky I am to feel this sense of pain, because it means I had the chance to know them - and now I carry part of them with me forever, in the things they taught me.

For a very long time, March has not been a kind month to me. But as I grow older I focus less on the unkindness, and more and more on my gratitude for a month - and a life - that has been full of incredible people and lessons learned, sometimes even through tears. 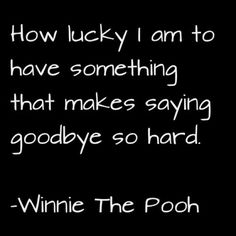