The Princess and the Thugs

Any sane person knows you should never, ever check the “available for adoption” pages at the local SPCA if you are a pet lover. Generally speaking I have fairly strong resistance to these pages, but last month a photo and description caught my eye as the cat featured was remarkably unusual. 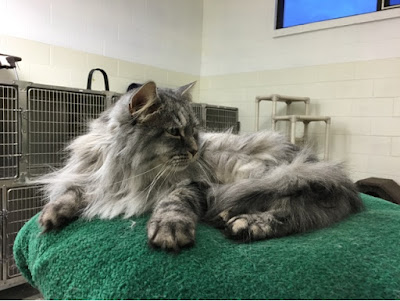 “Catya”, as she was then called (sigh, the inevitable cat pun) was listed as a 5 year old Siberian Forest Cat. Now, Siberian Forest Cats aren’t exactly common. In ten years working in vet clinics I only ever saw one, and kittens of this breed can fetch an astonishingly tidy sum. These cats are also known for their personalities, and so I was almost in a daze as I found myself in my car, which seemed to be driving us to the Fort McMurray SPCA.
And there she was in the cat room, holding court like the feline royalty she is. Soft meows and ferocious purrs emanated from her perch, where she would allow admirers to touch her (but not pick her up, as that is pushing the limit of her highness’ patience I quickly learned – admire the cat, yes, pick up the cat, no). I texted photos of her to a dear friend and to the Intrepid Junior Blogger, both of whom asked when I was taking her home. So of course I filled out the application, and within a matter of days “Catya” – now renamed Tsarina Nikita as befits the little monarch – came home. 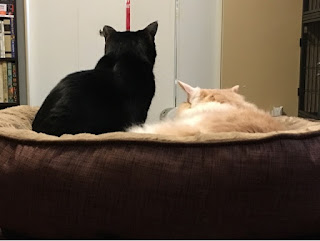 Now, lest you forget I do have two other resident cats, both males and both quite comfortable with the status quo. Sirius and Smaug are the Felix and Oscar of the feline world, with Sirius being the slightly neurotic but fundamentally very orderly Felix. Smaug, who has gained an impressive 6 pounds since his arrival home from the SPCA (an “unsustainable” weight gain, his vet admonishes me) is the dishevelled, somewhat slovenly but deeply lovable Oscar. These two have a remarkable relationship which involves all out occasional bouts of kitty MMA in the bathtub, slow seething running battles of paw swipes and teeth-filled chomps and deep and intense grooming, cuddling and sleeping sessions which run for hours. They are brothers in every sense, completely different in physical appearance and personality but completely devoted to each other – and then the Tsarina arrived. 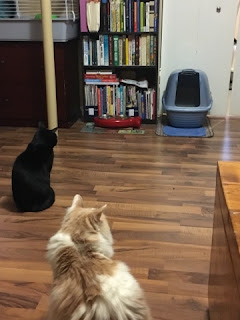 I think they were, at first, stunned. Neither of them would look at me for a couple of days, as they both seemed to know I was somehow responsible for this new family member. They were curious but in a “when is she leaving kind of way”, planting themselves in front of the slightly open laundry room doors where she was safely housed on the other side. They were immediately bitter that she ate Fancy Feast while they were doomed to food purchased at the vet clinic (very expensive food designed to keep Sirius from developing urinary tract infections and peeing in the sink, as once has happened). 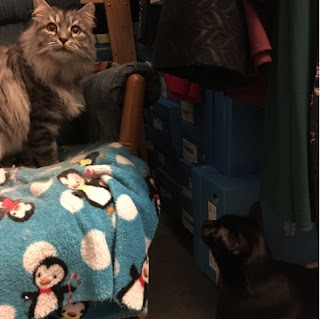 When I began to allow them to mingle with each other one thing became quite clear: Tsarina viewed the boys as street thugs, little ruffians not really worthy of her time. She is a very affectionate cat, but her level of interest in the boys has so far settled at the point known as “tolerance”. If they come too close there is a small royal hiss, and when Sirius approaches her she will walk away while quite deliberately hitting him in the whiskers with her long fluffy tail. 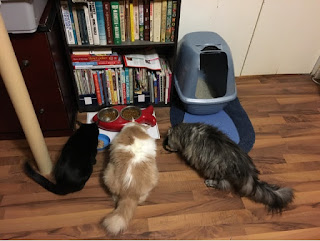 Other things the Tsarina does not like includes the family dog (poor Cassie – this makes 2/3 cats who are terrified of her, and Sirius just beats up on her) and the ferrets (these she finds completely baffling and gives a very wide berth). She does love treats, lousy grocery store cat food, being brushed and me.
The one thing all the cats have in common though is their place of origin – the Fort McMurray SPCA. I don’t know Sirius’s story, but it is evident he was at least partially an outdoor cat as he still yearns to escape outdoors on occasion (and once in awhile succeeds, only to be distracted by things like leaves and snow and quickly recaptured and returned to prison – his name Sirius Black fits him well as I suspect he sees me as a Dementor who holds him against his will some days). Smaug was obviously loved at one point as he doesn’t even like the outdoors, and an open door holds no interest for him whatsoever (but he will throw himself at anyone who comes through it, like when he greets the pizza guy by rolling on his back in his “rub ma belly” pose). Both Sirius and Smaug were picked up as strays though, and never reclaimed by their owners, a fact which both hurts my heart and makes me happy because it meant they were there for me. Tsarina had a family, and apparently when it dissolved she and her sister were surrendered to the SPCA, and her sister was quickly adopted while Tsarina, a bit older, had to wait a bit longer.
Regardless of how they ended up there, the Fort McMurray SPCA provided my trio with a safe place to be until they could find a new fur-ever home – which in their case just happens to be with me. My little gang of three – the princess and the thugs – are only a small number of the thousands of animals the SPCA helps in our community every day. I am deeply grateful to them for the work they do, and even more I am profoundly thankful that I now have this little furry family. And if you happen to be looking for a new furry family member, I recommend the Fort McMurray SPCA, where you can find a new friend - and become their fur-ever home. 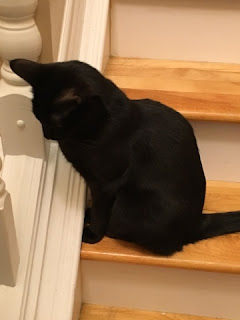 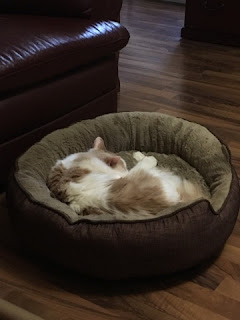 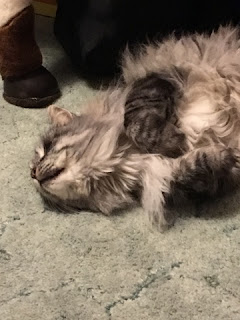