Whatever Floats Your Boat - the Peter Pond Paddle with FMPSD

There are offers you get you just can’t refuse. And when you are asked if you want to serve as a judge for a cardboard boat building competition involving local students, you’d be a fool to say no.


That would be how I found myself with a pencil and clipboard in hand last week as I served as a guest judge at the Peter Pond Paddle cardboard boat building competition hosted by Fort McMurray Composite High School. In addition to some teams of high school students there were teams of younger students from the south-side elementary schools in the Fort McMurray Public School District. The event was designed not only as a team challenge but as a way for the older students to connect with the younger ones, and for everyone to have fun in a day spent building – and then testing – their cardboard boats. There was even a last-minute addition of a team of teachers, who insisted they should build a boat too.
The judging part was fairly quick as my fellow judges and I evaluated the teams on things like team work, the strength of their construction, the design they created beforehand (and if they followed it) and the cleanliness of their work space (this was an interesting one as some were so tidy you would never guess boat building was going on while others looked a bit like an explosion at a cardboard and tape factory). 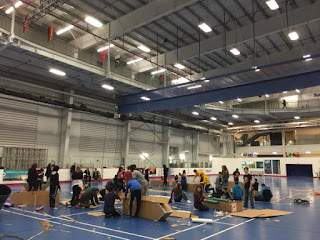 But once the judging was complete the real fun began, as it was over to the Syncrude Aquatic Centre pool to test the boats.
Let’s be clear. I am a writer and not an engineer, and I must say I learned a great deal about building cardboard boats that day. I don’t want to give too much away as I know this may become an annual event, but I will say that in cardboard boats size DOES matter and bigger is not necessarily better.


Amid cheers and shouts and laughter and clapping the teams selected one member to get into the boat and attempt to paddle it from one end of the pool to another. Some boats made it a few feet before meeting their demise, while some never quite left the dock, folding up quickly and quietly and enveloping their hapless captain. In the end only two boats made it all the way intact – one from the Composite High School students and one from the Beacon Hill Bears. 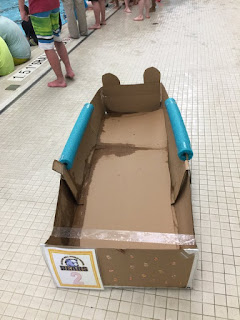 All photos courtesy of FMPSD
Confession time: the Intrepid Junior Blogger began her education as a Beacon Hill Bear. In fact we choose the school, and for six years I drove her there every day as it was not the school designated by our neighbourhood bus route. But there was something about the school, the staff, the teachers and the culture that we loved, and so we made that trek every single day regardless of the weather. I must admit I was rooting for the Bears team, so when their boat was the first to make it the length of the pool I likely cheered louder than anyone.


And about that boat from the teachers? Well, let’s just say they weren’t expert boat builders either. As their boat began to flounder about ¼ of the way across the pool I found myself shouting things like “Try harder!” and “C’mon, you aren’t even really trying!” and tee-heeing to myself in some sort of twisted latent revenge for all those years of gym classes when I failed to climb that bloody horrible rope thing that they made everyone try. I loved my teachers then and I have such respect for teachers now, but I must admit I am not above a bit of trash talk when it comes to “encouraging” them in the same manner I was once encouraged (and no, I never made it to the top of that damn rope, and no, the teacher’s boat never made it across the pool, either).
But at the end only two boats remained, and the final challenge? See how many team members could fit into each boat before it sank. While the Composite team gave it a good try, it was the Beacon Hill Bears who managed to fit three people in their boat and still keep it afloat, although it was taking on water at an alarming rate towards the end. 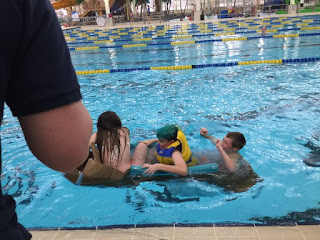 The aftermath of the day was a lot of wet cardboard, a lot of sore throats from shouting and a lot of smiles and laughter as even those who saw their boats sink had had a raucous good time while doing it. It was definitely out of the norm for their average school day, and it was more fun than I have had in ages. 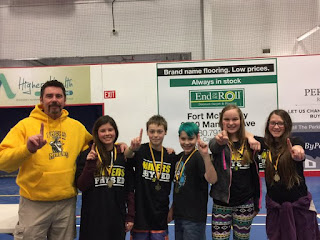 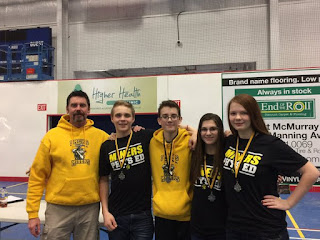 There are likely people who question the benefit of events like this for students, but to me they are so clear as to be immediately obvious. It encourages the kids to work as a team, it allows them to connect with peers from other schools, it shows them that learning can be fun and it reminds them of the practical application of such skills (if they are ever on a deserted island I can guarantee none of them will ever consider building a life raft from cardboard, for instance). The sense of team spirit and camaraderie was unmistakable, and the pride in both the students and the teachers was evident. And to be honest, I was both proud and delighted just to be there.


Our most precious resource in this town is not oil, regardless of what anyone says. Our most valuable resource is our people, and perhaps most especially our youth who have their entire future ahead of them. This resource is the one in which we should take both the most pride and the most concern, because it our youth have the opportunity to change our world. While they may not do it by building cardboard boats, they will do it through the skills they are acquiring at such events and every single day in our schools.
My thanks to Kevin Bergen, principal of Fort McMurray Composite High School for the invitation to be a judge, to the FMPSD for always doing what’s best for kids (including all the years they did what was best for mine) and most particularly to the students who welcomed me into their day. I smiled a lot, laughed like crazy and learned that cardboard is not the best boat building material in the world. So really, it was one of the best days, ever! 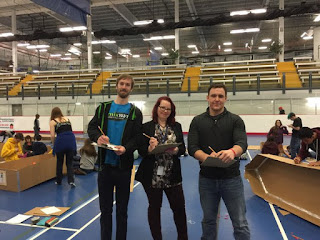 All photos courtesy of FMPSD