We Can Be Heroes

I awake at about 2 am, unable to sleep for whatever reason. It has already been a restless night, another in a row of restless nights as I struggle with some of the same demons we all face in the dark at 2 am.

I grab my phone to check the time and find myself checking Facebook instead, finding my timeline filled with posts that knock the wind and the sleep right out of me. 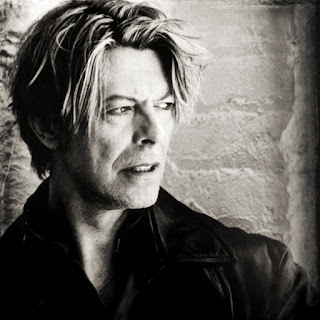 Perhaps I'm asleep and dreaming, I think. You see in my head Bowie and I have always had this deal: I would keep him in my heart and head as my hero, and he would keep on living. But while I've held up my end of the imaginary deal it seems cancer (fuck cancer!) has stolen his ability to keep up his.

I never met Bowie, of course. The first time I heard a Bowie song I was likely about 12, the child of a farming family who found themselves living in the city. My parents were good people, solid and loving and kind, but admittedly I was not entirely like them and I always knew it. I was offbeat, a bit discordant, different in a way I couldn't define and they didn't really understand, although they loved me just the same. In those fragile preteen years someone told me it was okay to be different, to be unique, to approach life with ferocity and wring every drop of experience out of it.

Growing up in a small prairie city wasn't always easy when you were different. I was the girl who didn't fit in, the one with funny colored hair and strange clothing. People were either intrigued or appalled by me, but the joy was that I just didn't care because Bowie had shown me that what they thought didn't matter. I could be me, true to myself, and that was, in fact, everything. It was the only thing.

As Bowie changed over the years so did I. I was never one of those rabid fans, never owned every album or every t-shirt. I didn't want to kiss him, didn't want to be intimate with him, wasn't a hopeful groupie and wasn't in love with him. I didn't want to be him - I just wanted to be like him, to have his courage and his swagger and his confidence and his utter indifference to his detractors. And I always knew he was there, doing his own thing just as I was doing mine, and the world was spinning right on schedule.

His influence affected every part of me - the friends I chose, the men I loved, the things I held precious. He showed me I could befriend those people others thought too weird, love those who danced to their own rhythm and believe in anything I wanted to believe.

And as I continued to grow older I began to realize that I would likely truly begin to feel old when Bowie died, as I recognized he was a bit older than I and likely to die before I did.

Yet as I lay in bed trying to absorb - no, just understand - the news of his death I didn't feel old so much as I felt grateful. Without Bowie I wouldn't be who I am today. Without Bowie I doubt there would have been the years of activism, the funny coloured hair, the bold move across the country to a city I had never even visited (Toronto), the crazy experiences and stories or any of the people - very different people, most of them - that have filled my life and continue to fill it to this day.

And to some degree I feel like I failed to hold up my end of the deal too, as while I've always held him as my hero, as years and time have marched on perhaps I have allowed the weight of the world to settle on me and forget how Bowie told me it was okay to be different, to be bold and to take risks just because I am me. I see glimpses of it now and then, flashes of the young girl who listened to Bowie sing and realized that she didn't have to be like everyone else. I see it in my resolve to stand up for what I believe, even when others think it is wrong, and in being unafraid to be the one different voice in the crowd, knowing that it is okay to be that voice as long as the voice is truly mine. I see it when I refuse to change my views to suit the conformity of others. But I wonder if maybe there are too few glimpses now of that girl, and perhaps there should be far more. (I'm sorry Bowie - I'll work on that)

I grew older, just as Bowie did, and now his death has reminded me of the impact his life had on me - and millions of others. I know many others had their own relationships with him, some far more intimate than mine, but I would be remiss if I didn't acknowledge how he touched my life - more than any other performer, musician, artist ever has. Perhaps more than almost any individual ever has.

David told me we could be us, just for one day. He said we could be heroes, just for one day. But I think by one day he meant for our entire lives, because thanks to him I've been me for as long as I recall, and he's been my hero. Even death cannot sever that, because I will be me until I die, and David? Until the moment I follow him into the long dark night that awaits to eventually enfold us all, he will be my hero, showing me the way.