“I thought about going to Paris next year,” says one voice.


The other says: “Well, I guess that’s out now.”
The first voice replies: “Now I am not sure if I will ever go – it’s just not safe” and they move away from me, caught up in the conversation of which I have just caught a snippet. But in that snippet I found such sadness and defeat, because in those three short sentences I saw that terror had won.


This past weekend I suspect many of us did some soul searching. Some of us spent our time unfriending and unfollowing people on our various social media streams, disappointed and even disgusted at some of the hateful things that spewed forth in the wake of the horrendous attacks in Paris. Some of us were carried back in time to 9/11, remembering what we felt then and reflecting on how it changed the way we saw the world. Some of us sat transfixed to our televisions and our computer screens, watching as the stories unfolded.
As for me, I spent the first 24 hours studiously avoiding the media coverage as I had learned my lesson during 9/11. The first few hours are often filled with panic and bereft of any real information, as there has been no time for in depth understanding to develop. The story will unfold over the days to come, and there is no urgency to watch the pain and suffering of others, at least in my mind.


During those 24 hours, though, I thought a great deal about how I had never been to Paris. I thought about all the other cities I have visited and lived in, and I decided that Paris would surely need to be in my travel plans soon, because I have always wanted to see it and my desire had not been quelled in the least by these attacks.
Perhaps that is why the overheard conversation troubled me so. Do you know how terrorists win? They win when they make us live in fear. They win when they stop us from working in tall office towers in New York City or flying on airplanes. They win when they stop us from using subways or visiting nightclubs.


They win when they make us think twice about visiting one of the most amazing, historic and fascinating cities on the planet.
Terrorism isn’t just about killing and maiming. It is about creating fear and controlling us through it. It is about turning us against each other, making us fear each other. It is about planting seeds of doubt and watching them grow into forests of anger, resentment and hatred.


I can’t speak for anyone else, but long ago I rejected a life of fear. I spent some time there, living in fear, and it was a dark place where the world became devoid of joy. And so I made a choice. I decided I would never live in fear again, because life is too short to be afraid.
There are undoubtedly some who think this reckless, this refusal to be afraid, and yet I find it tremendously freeing. Yes, there is some risk – but just as with every life one day mine will be over, hopefully long from now and the result of old age and not the plots of others. But regardless of how and when I die I will know one thing: I lived a life without fear, and it has been richer for it as I have taken chances and done things I never would have done had I let fear rule my existence.


Make your choice as to how you live, just as I have made mine. Just know that it is a choice and not something pre-ordained. Choose, and choose wisely, because it is a choice that will determine the remainder of your brief but bright life on this planet. 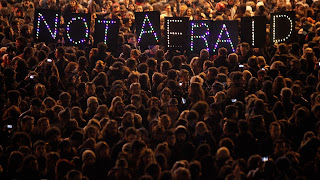