Fort McMurray, We Have Ignition

It was very early Sunday evening, but due to the time change the sky was quickly growing dark. I had been so busy that I had not yet taken in a very special public art exhibit, and it was the final day for the works to be on display. There was the option to sign up for a bus tour, but I am no good at those kind of scheduled things, struggling with timelines that may differ from my own desires and a tendency to wander off when deep in thought (the reason why I will never visit another country with a tour group, as it would be frustrating for all parties). Instead I bundled into a warm coat, tucked my iPhone into a pocket, and headed downtown to see igNIGHT.


This year marked the second year of this remarkable temporary public art display. In a place where the dark comes early on those cool fall nights, it is the perfect opportunity to showcase public art works that incorporate themes of light. We are still very early in our exploration of public art in this community and we experience some degree of confusion over what is (and is not) public art. For instance the controversial “Weather Catcher” at Jubilee Plaza is an architectural feature, not public art, and the controversy surrounding it has muddied our early days in this exploration as we must learn to differentiate between public art and other forms of public features (a future blog post on that is certain, but for now I will focus on something that most certainly is public art, being igNIGHT).
I drove around in my car, clutching my coat around me whenever I stopped to observe the remarkable pieces of glowing artworks that comprised igNIGHT. It was in Jubilee Plaza, though, that I found myself stopped for some time, unable to pull myself away from the juxtaposition of two pieces from different artists that played on each other and played with my thoughts.
“The Pool”, composed of glowing disks atop a small platform, was an intriguing pattern of lights and colours, and when I visited alive with the shouts of children as they hopped from disk to disk, making up rules of the game they had just invented along the way. 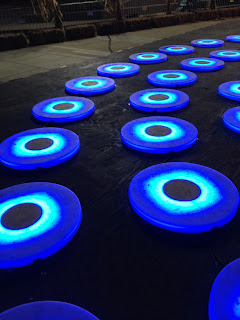 “You can only move forward,” shouted one voice. “No going backwards!”
“Everyone needs to hop on the red disks as soon as they light up,” shouted another, and there were shrieks as almost instantly the glowing disks began to change to red and children hopped frantically from one disk to another.


It was one of the most lovely things I have seen here in a long time, children interacting with a public art piece, full of life and joy...and it was even more compelling given the artwork facing the disks. 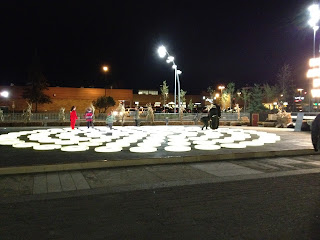 “Rage rage against the dying of the light”, it spelled out in bright incandescent light bulbs. It is a line from a poem I know by heart, written by Dylan Thomas and penned in response to the death of his father. A year after writing the poem Thomas himself died at the age of 39, far too soon for such a gifted poet, but as part of his legacy he left behind a poem that makes one think of our own mortality, and that of others. 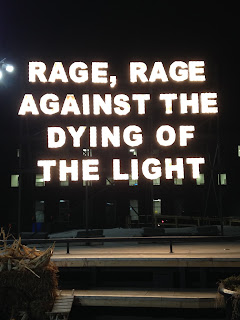 As I stood in front of the artwork I heard the children still shouting behind me, playing on the disks. “Do not go gentle into that good night,” ran through my head repeatedly, followed by “rage, rage against the dying of the light,” as I thought of how just like those incandescent bulbs that formed the sign each of us would go dark one day, our light gone from this world. As I have grown older and recognized I have fewer years ahead of me than behind I have begun to come to terms with my own mortality, but it is the mortality of others with which I struggle, as I am not good at letting go. 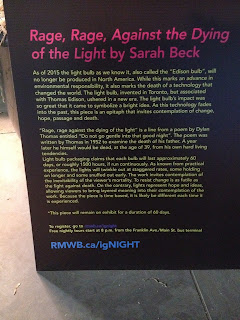 Consider the humble incandescent bulb. Invented in the late 1800’s, this ubiquitous household item that we take for granted entirely changed our world. Cheap, readily accessible, easily used – the light bulb revolutionized our entire existence. Given the time since invention, it is not likely there is anyone alive who remembers a world before the existence of the incandescent bulb...and now, due to a desire to lessen our environmental footprint, countries all over the globe are phasing out the type of light bulb that changed our world in favour of other kinds. The light of the incandescent bulb is dying.


As I stood in front of the public art piece dozens of different thoughts competed for primary attention in my head. “Mortality”, screamed one. “The juxtaposition of children laughing and a poem about facing the end of life,” shouted another. “The bulb!” shrieked yet another. “The incandescent bulb, blinking out just as our lives do, a metaphor for lives that burn hot and bright and then suddenly go dark.”
Before I knew it forty-five minutes had passed and I was still in front of the artwork, the thoughts now starting to assemble themselves in a more orderly fashion, the children behind me now gone on to other things. The plaza was quiet and dark and cold, and all that existed was me and a sign that said: “Rage, rage against the dying of the light.”


As I walked back to my car I thought about how this art installation would remain in place until the final bulb on it has burned out, the sign going dark forever. It felt fitting and it felt right and in some way it felt almost glorious, as far from raging against the dying of the light I recognized my own acceptance that all things, from lives to light bulbs, one day come to an end.
I climbed into my car, driving away and feeling as if I had just experienced something quite profound, thanks to a simple public art display. I drove to Boreal Park and took a few photos of the lighted canopy at Shell Place (architectural feature and not public art, incidentally) and thought about how public art can enrich our lives, like the children who played on the lighted disks of The Pool and the almost surreal experience I had just had in front of a simple lighted sign. 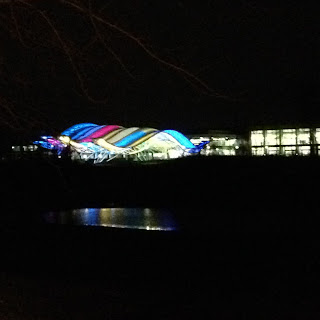 Fort McMurray, we have ignition. Public art has just begun to ignite here, thanks to events like igNIGHT, and I know there is far more public art coming to explore, enjoy and evoke our feelings. I am so grateful to have the opportunity to watch it grow from a spark into a flame, a light that if we tend it carefully never has to burn out. We can watch it glow for years to come, and never need to rage against the dying of that tender and wonderful light. 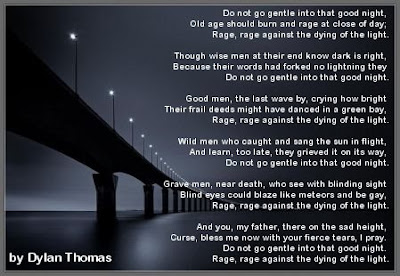