From drummers and dancers to stunt ATVs and motorcycles, from parachutists and helicopters to float planes and giant puppets, from sudden blasts of blazing fire to a virtual cannonade of firework blasts, it had something for everyone.

The Opening Ceremonies of the Western Canada Summer Games 2015 Wood Buffalo took over Shell Place last night in Fort McMurray, and when I say "took over" that is so much less than what actually happened, which was a spectacle of light and sound and colour that on occasion left me breathless and not even entirely sure where to direct my eyes as there was far too much to see. 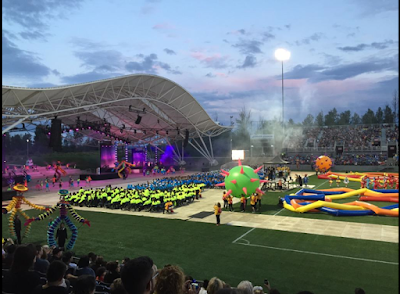 Over a week spent watching the rehearsals from the vantage point of my office, I had quipped to colleagues that the only things I had not yet seen in the ceremonies were ponies and blimps, and that I half expected them to appear at any moment, too. And while no ponies or blimps were used in the production in the end I think it was far more than anyone expected, and far more incredible than anything we have seen in this community to date.

It was an opening ceremony worthy of welcoming 1400 young athletes and their parents and supporters from across Western Canada. They walked into the stadium last night (well, some, in their youthful exuberance, cartwheeled in, giving a pretty good indication of who were the gymnasts in the bunch) and were greeted with shouts and cheers, the kind of warm Wood Buffalo welcome we give to visitors. I was perhaps most excited for them, these young athletes having the opportunity to participate in an event like the Games, not only excelling at their sport but having the chance to meet other young athletes from different cities and towns in our nation. 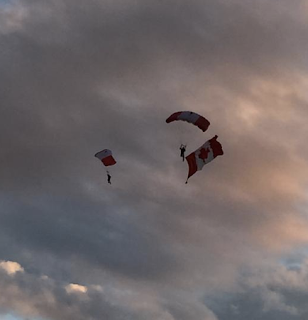 The few speakers that took stage were succinct and to the point, perfect in tone and pitch and length, allowing the gathered crowd to focus on the beauty of the event and not the speeches (and while I love a good speech, I love short and heartfelt speeches even more).

I suppose I should not have been surprised with how incredible it was, given that PRP (Patrick Roberge Productions), the production company, has in the past been responsible for events like the opening and closing ceremonies of the Vancouver Winter Olympic Games, and yet I was in some sense surprised as PRP took an incredible vision for a spectacular show and wove our community, our history and our legacy into it tightly, paying homage to our rich past from the float plane fly-by to the local musicians rocking out on top of a bright yellow loader. 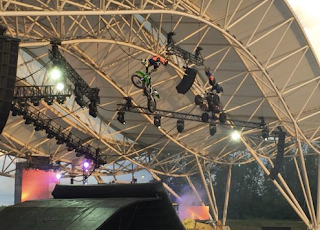 It was very much a Fort McMurray, Wood Buffalo spectacle, designed for and created with the people of this region, showcasing people like the aboriginal drummers who worked so very hard to be there last night (a story I have been following from the beginning, one of commitment and dedication and steadfast devotion to an end goal, all thanks to two people I am honoured to call friends, Sonia and Bill) and like the many young dancers who rehearsed for endless hours to shine on the stage last night.

I watched it all unfold and couldn't stop myself from grinning, this foolish, almost gobsmacked kind of grin as a helicopter landed on the berm outside the baseball stadium and the flame arrived to light the cauldron. I choked up a bit to see Elder Elsie Yanik, someone who has touched my heart more than she will ever know, light the flame in the cauldron just as I witnessed her do when the Olympic flame came to our community several years ago.

To all those who contributed to the opening ceremonies, all those who have worked so hard to deliver the games to this community, from the staff at the Western Canada Summer Games 2015 Woof Buffalo to the many volunteers, all the visiting athletes and supporters and all those who attended last night: thank you. Long after the final firework lit up the sky, the energy, vibrancy and enthusiasm of our region and community continued to shine, just as it will for the next ten days and as it will do even after the closing ceremonies signify the end of an amazing journey on August 16.

Last night, though, we officially declared "Game on, Wood Buffalo", and so it is, ushered in in by one of the most amazing, spectacular and sensory-rich events I have ever witnessed. 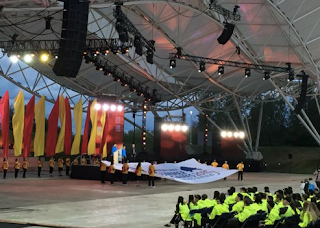