To be very honest my original intent was not to spend my few days off this summer in Fort McMurray.

I had made plans to fly to Kelowna to visit my sister, spending a few days with her in that lovely location, but as the date for my trip began to approach things in my life changed and I realized I didn't feel like leaving home.

The reasons are complex, and undoubtedly I will share them in a future post, but the reality is that I just wasn't up to even the minor stresses of flights and airports. I needed some time to decompress, and, to be very frank, I needed some time to remember why I fell in love in with Fort McMurray. I needed an actual staycation.

I always thought the staycation concept a bit weird - I mean, aren't vacations about going somewhere and doing something new? How is staying home doing anything new? Except in my case I had the opportunity to explore some new things in Fort McMurray, which is exactly what I have been doing with my time off, as well as revisiting some perennial favourite spots, too.

Monday morning found me bright and early at Jubilee Plaza on Franklin Avenue to check out our newest - and perhaps most exciting - local and independent coffee shop. Blue Mountain Bistro has opened up, and what an incredibly refreshing advance it is for us. Instead of a chain coffee shop, BMB has brought the rhythm of Jamaica to downtown Fort McMurray (the owner also happens to operate Chez Max, the new Jamaican food joint in the Towers). The vibe, with the wide open atmosphere, sunshine and smiling staff is laid-back, friendly and casual, bringing a new vibrancy to the Plaza. 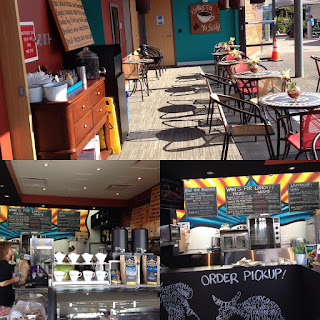 When Jubilee Plaza was envisioned I suspect this is what they had in mind, and it is finally a vision coming to reality. I sat in the early morning sunshine with my coffee, reflecting on what an idyllic little spot it is for a coffee shop/bistro, and quietly observing the "weather catcher", a public art piece that has elicited some local controversy.

The weather catcher certainly looks like steel scaffolding, but when operating apparently sprays  fine mist down below, and given the exceptionally hot and sunny plaza this would likely provide some relief on days when it might otherwise be a bit unpleasant. It wasn't misting when I was there, but I couldn't help but reflect on the fact that public art of this kind is often controversial (remember 'Traveling Light', the giant blue ring in Calgary?). There are many who decry this structure in our downtown core, deeming it ugly, unappealing, too expensive and useless, but then again the same accusations have been levelled against a lot of similar installations and public art pieces (except for the very safest and most innocuous pieces, which is how you end up with those ghastly and terribly inaccurate-in-detail dinosaurs all over Drumheller). I found the piece rather interesting, to be honest, observing the sunlight reflecting off the steel and wondering if the mist creates small rainbows as the light passes through the fine water. Some day I will return to find out.

As I sat and enjoyed the new coffee shop and the plaza I realized how just one small change can truly act as a catalyst. It was clear employees from local businesses were gathering at the new coffee shop too, starting their days in the sunshine at the small tables in the shop and the ones at the plaza. Suddenly a space that was, for the most part for many years, under-utilized was bustling in a way few places do in our downtown core, and it was incredibly exciting to see as one can only hope this energy continues to grow.

Once my coffee was done I headed down to another new spot - Snye Park. I had been seeing photos of it on Twitter for a bit, the new building, playground and park, and I was anxious to see it. When I arrived the kayaking competition at the Western Canada Summer Games was in full swing.

How lovely it was to see the park busy even on a Monday morning, children at the playground, the water alive with young athletes while parents cheered from the shore and the beach volleyball courts filled with teams warming up for their coming games. The building, compact but functional, looks like it will eventually host a cafe as there is a small space designated as a kitchen and another space designed as a cafe, along with some offices. I explored a tiny bit, just enough to satisfy my curiosity, and then I went out and sat on the grass for the moment to watch the kayaking. 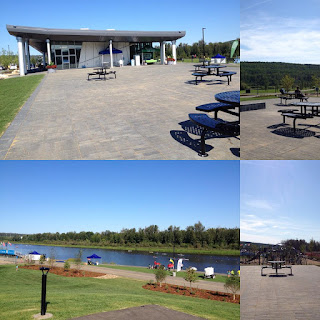 I observed the children on the playground, the people sauntering along the boardwalk and the fans gathered for the kayaking event and again I thought about how even such small changes can create such a large impact. Ever since I arrived here, 14 years ago, I wondered why we did not maximize the usage of our waterfront, a natural focal point for our community. Having grown up in Saskatoon I had always had such waterfronts as part of my life, places for picnics and outdoor play, places for quiet Sunday afternoons and sunny early weekday mornings. A space that had for years been overlooked was coming to life with just a few small changes, but ones destined to have a significant impact.

Some of these changes, from the public art weather catcher to the plaza itself and the re-visioning of the Snye, have generated a great deal of controversy. Change of any sort can be an unnerving, unsettling and disturbing process, whether it is in our community or in our personal lives. Sometimes the change is truly for the worse, but often it is simply a change that we have trouble embracing because we have become accustomed to the status quo, and we are reluctant to see it change, particularly if there is some risk that it will harm us, not help us. But life is about risk, and change, and moving forward even when it is difficult and even when one is reluctant as hell to take a chance on the changes and see where they will lead you.

Check out the new coffee shop, and the plaza and the weather catcher - and do it with an open mind and heart. Take a walk on the boardwalk at the Snye and honour the past of our waterfront while envisioning its future. Change is inevitable. Some we will like - and some we will not. One short morning in Fort McMurray reminded me that change, whether we like it or not, happens, and it isn't the change that colours the future; it is instead how we respond to it.

It was a reminder I desperately needed, and found it right here, in the often-baffling, sometimes-confusing, frequently-maddening and always amazing place I call home.
at August 11, 2015