It's a bold word, one with a long history of ship crews overthrowing their masters to seize control. Undoubtedly, sometimes it was without cause, but often it was likely rooted in a determination to preserve the health and safety of the crew, which may have been of secondary concern for ship captains and owners more focused on profit than people.

Enter the recent debacle - or calamity as Mayor Don Scott has called it - regarding the determination of the current Alberta government in transitioning local emergency services dispatch to a centralized model. This is despite previous governments (four, in fact) suggesting the same strategy and backing down when confronted with the facts.

The truth is that our region is unique. When an emergency arises, it is as likely to occur on some unspecified point on Tower Road or some remote corner of the many rural spots in our region as it is in urban Fort McMurray. The difference is that local dispatchers know the region. They know the hidden spots, the nicknames, the best ways to get there from here...but a central dispatcher can never hold that information.

So what does that mean for our region, our communities, our people?

In an emergency, the adage that every second counts isn't just a saying. It's true. Every. single. second.

The difference between life and death hangs on if a dispatcher knows the region - or not.

For the last several months, RMWB Council has been trying to work with the province on this issue. Trying to show them the facts, how our dispatchers are faster than a centralized service, how this change will negatively impact our community...and how it will, eventually, cost lives.

All to no avail. The Government of Alberta has turned a deaf ear to us, not only suggesting our concerns were invalid but that we were in some way lying about the consequences.

And so, they moved ahead with the transition, without any consideration of our concerns and fears. Despite the offer from our municipal council to pay for the service, since our provincial government indicated cost was the issue (and one has to wonder if we were going to pay, was cost really the issue? Cue conspiracy theories here). Despite everything.

And we are already seeing the real cost, just days after the transition. Stories are already rapidly emerging about delays, about mis-steps, about tragedies in the making.

And still the province refuses to budge.

Today, at their regular council meeting, RMWB Council voted unanimously to approve a motion that would see our local dispatchers refuse to transfer calls to the centralized dispatch.

Defiance, the same kind the province has exhibited, but defiance in support of saving lives by saving time for every emergency call requiring medical services.

It's perhaps the boldest move I have ever seen made by a municipal council. And I have never seen it more necessary, more courageous and more critical. And for this I say bravo to our council, bravo indeed. And brave, too.

In 2016, this region's determination was forged by fire, and this past year by flood. We have been going through an economic downtown (more than one, really) and a pandemic. And we remain resolute.

We are committed to each other, to our community, and to our safety - and ship captains focused on profit (because surely that plays some role in the provincial decision) be damned.

And so, Regional Mutiny of Wood Buffalo.

It has a nice ring to it, doesn't it? 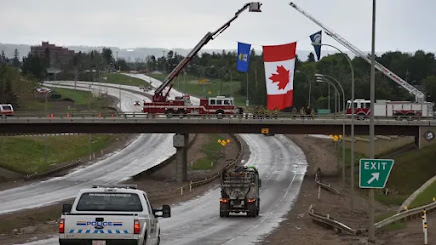