Just days later, a blazing inferno descended on my community.

Just weeks ago I penned an "I'm back" note on this blog.

Weeks later a blazing inferno descended on all of us.

And yet I think in the way our brains do, my brain seeks a pattern and found this one, this little blog acting as some sort of bizarre marker in my life, two major crises somehow reflected in it.

I have struggled to write about this, as it feels like every word that could possibly be written about a pandemic likely has already been put on paper or a screen; and yet I felt compelled to finally write about my own feelings on this experience as this week they culminated in a terrible revelation.

For the very first time, in over a decade, I was grateful that my parents were gone.

And yet somehow it never felt quite coincidental.

March has not been my favourite month for a very, very long time.

And this year March took on new catastrophic proportions as the reality of the pandemic began to hit hard and deep, and I found myself grateful that they were gone.

They would be in their nineties now, terribly vulnerable to this illness. They were born in the 1920's; they saw the Dirty Thirties and the Great Depression. They saw World War II, the polio pandemic, the Cold War, and more.

My mother lost a sister to scarlet fever when antibiotic use was still in its infancy; they knew the impacts of the Spanish Flu pandemic as while it had just missed hitting them directly it had deep effects on the world they grew up in.

And this week I found myself being so grateful that they did not have endure this towards the end of their lives, this frightening time.

And then, in a sudden moment of clarity, I realized I had it entirely wrong.

If anyone could have handled this, it was my parents.

They had in  fact seen it all. Wars and diseases, tragedies and death. If anyone could have been strong through all of this, it was them.

It's me who will struggle, their youngest child born during a time of relative prosperity and only knowing their struggles through their stories. The challenges I have faced in my life pale compared to theirs.

This is a difficult time. But like my parents I know I must look for the things that ground me; the reasons for hope in the uncertainty.

My daughter, my work, my family and friends, my home, my firm belief in our ability to overcome; these are the things that saw me through the blazing inferno in 2016, and they will see me through this fire, too.

And my parents. I wish they were here, because I would like to be able to tell them that they are the reason I can make it through the things I do. Their strength, their courage, their wisdom and their love gave me every tool I need to build a refuge of strength in a sea of uncertainty.

My parents always believed in the good we could do; they believed in taking care of others before themselves. They knew the importance of community and of connection; they knew how to find the silver in the darkest of clouds.

And they didn't learn any of that because their lives had been easy.

So here we are. The days ahead remain uncertain, and there will likely be some very hard times; there is no denying that. But just as my parents - and grandparents and every single ancestor - did, I will persevere. Really, what else is one to do?

And I got to work, doing what I can do personally and professionally to help others, because that, at its very core, is what they did - always.

And that is how they survived both the best and worst of times.

Because in the end what they believed in - whether during war or peace, tragedy or celebration, life or death - was the need for all of us to be there for each other, as in the end that is truly all that will ever really matter.

Today I am just grateful for their example - and that they have always been, and still are, in some way, here for me. 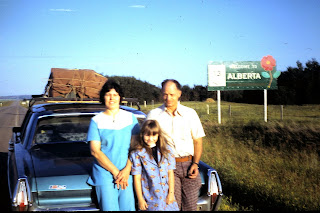