Giving Thanks for Democracy and My Daughter

Thanksgiving Day,  2015: Today, I took my daughter to the airport for her flight to Calgary, and then I went and stood in line with dozens of other residents and voted in the advance polls for the upcoming federal election. These two things may seem unrelated, and yet in my mind they are deeply connected, as they are perhaps the two things for which I am most profoundly grateful.

That I am thankful for my daughter should be quite obvious - as she would likely say: "Thanks for pointing out the obvious, Captain Obvious". I could not be more proud of this young woman or more honoured to be her mother, as she is strong and smart and independent and bold and courageous and ferocious in all the very best ways. She is the best of me and yet minus some of my more glaring flaws. She is the future in every sense, as she is on a trajectory to do great things, whatever they happen to be, and I believe one day she will lead and mentor others to do great things, too.

And perhaps it is because of her that I am so thankful for democracy. As her mother I have the opportunity to have a say in her future and in the trajectory of the country in which she is growing up. One day soon - two years, in fact - she will be able to vote and will cast her own ballot, but until then I cast one with her future in mind, as she is the one who will inherit this nation, and she and her cohort will be the next generation to lead it.

Today as I stood in line to vote, awed by the massive turnout for the advance polls, I thought a great deal about my daughter and democracy. We have so much to be grateful for in this country - a proud history of immigration and multiculturalism, a strong sense of identity and quiet patriotism and a warm and welcoming atmosphere that has embraced families from around the world for generations, including my own a few generations ago.

Part of the joy in democracy is being able to openly share our political ideals and opinions, and even where we have chosen to place our X. We do so free of repercussion, knowing that true democracy means we can openly support those we choose without fear of reprisal. In the past I have been criticized for sharing my own political beliefs openly, as there are those who fear the open sharing of such thoughts can prove influential to others - and yet that is exactly why I am so very thankful for democracy, because we can share these thoughts and beliefs. Democracy - true democracy - hinges on that very fact.

I voted as I did today because I want the Intrepid Junior Blogger to grow up in the kind of Canada I did. I want her to grow up with a government dealing with issues likes ensuring quality education for everyone and addressing poverty, not one creating imaginary monsters to manipulate the public through fear. I am weary of a government that believes fear is the way to govern, as while it is a powerful tool it is one designed to strip us of our free will and our ability to think independently, as we become so consumed with fear we fail to question.  I have no interest in governments that create paper tigers to foment fear, ones that divide Canadians and go against everything we have worked to build in this country, like acceptance, understanding and peace.

Two years ago a visiting politician took half an hour out of his schedule to meet with a 14-year old young woman who had a lot of questions about politics. She wasn't old enough to vote, and it was unlikely the time he spent with her would translate into many votes for the local candidate, but he did it anyhow. He treated her like she was an adult, answering her questions and offering his thoughts in a candid and refreshing way. I witnessed this exchange with some degree of amazement, as what I saw was a tremendous gift being given to a young woman who is keenly interested in democracy, in politics and in the future of this country. The young woman was, of course, the IJB. 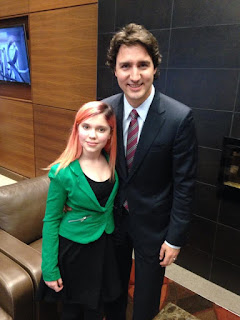 Friends, we have much to be grateful for today, and every single day. Perhaps more so than ever though we should be thankful for the opportunity to experience and exercise democracy. I hope that your gratitude is keen enough to compel you to vote in this election, whomever it is you happen to support with your vote.

Today on Thanksgiving I am thankful for my daughter, and for the opportunity to vote for a change that I believe will benefit her future, and the future of this country. You might agree with me, and you might not - but I hope you share my gratitude for your own ability to vote, and I sincerely hope that you  show that gratitude by heading to the polls and having your say in our future, too. It is one aspect of our lives in this country for which we should be very, very thankful, and today seemed like the perfect day to celebrate it.
at October 12, 2015